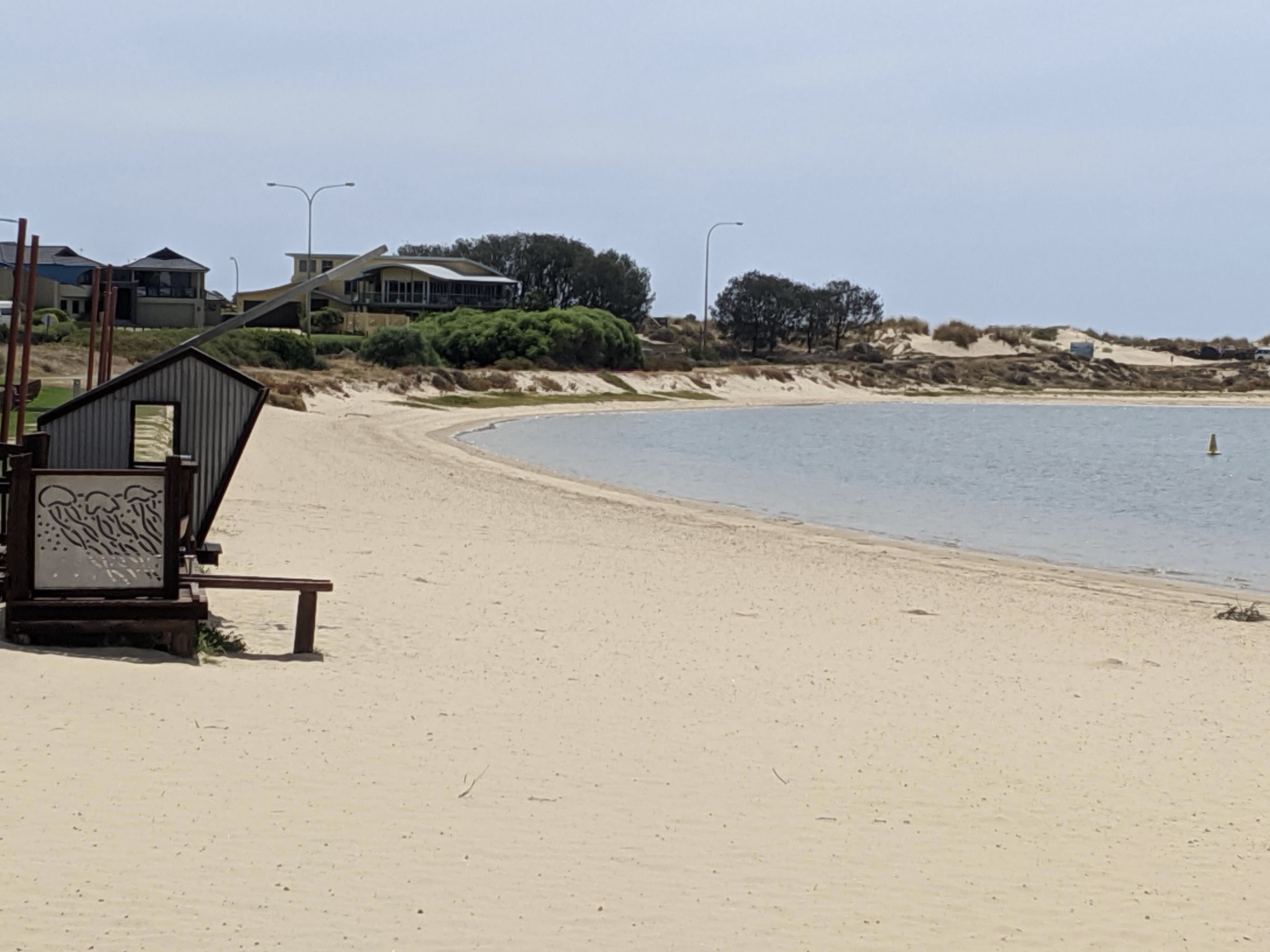 By Daisy
It’s a busy night tomorrow for romance. I do believe we have First Dates and MAFS on Wednesday. I look forward to both.
Seeing that I am sitting alone in a café, waiting for my date to arrive, I thought I would write a FD spiel.

No, I do not have my boobs out. I am not wearing a stretchy, too tight dress. I do not have a weird laugh, or strange table manners.
My date might be a tattooed gorilla. I will be paying my own bill.
See you tonight. 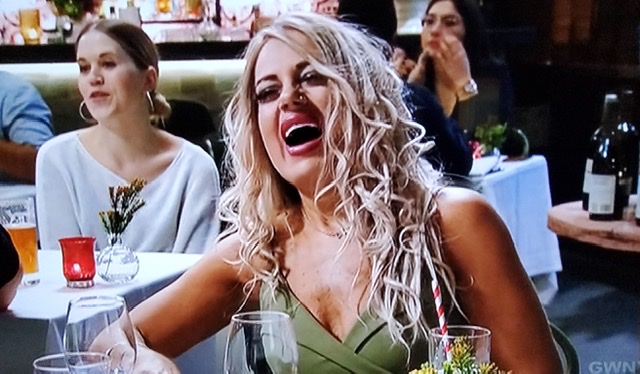 By Daisy
Let’s get this burning question out of the way. What reality TV has Simone been on before? Maybe in Australia’s Top Model? Juz’s note: Yes, she came about third in an early ANTM and was on Celeb – maybe our first one?)
I have definitely seen her before. Last night she was matched with postie/ postal worker Peter. She was being all, “I’m out of your league, babe”. The accent was put on, or adopted. He looked normal. Knowing Peter is a postie, Simone keeps mentioning her post code. Simone is being a snooty cow. I’m thinking staged.

Belly dancer Aleesha was back, wriggling her hips, flashing her boobs, and batting her eye lashes for sexy, sixty Zane. She planned on being touchy feely. They both like dress-ups. Aleesha has an immediate orgasm. For gawd sake get Aleesha a hairdresser. She looks like a mangy sheepdog. He has his 50s rocker on. Channeling Frankie Holden. They bond over truffles and some public dancing. Aleesha is “thrown out of line” shocked that Zane is 61 to her 53. Don’t worry Aleesha. You look the same age. She shakes her boobs at him, and is all over him like moss on a damp rock. Zane is ticking boxes all over the place. But then bill time comes. The mood and music change as Aleesha has to rummage in her (unmatching) pink handbag to find $50 to pay her half of the bill. Zane and Aleesha agree to disagree on that one.

Ad break (ooooo Pooch Perfect with Rebel Wilson…I’m in for a peek). Then we have cheerleader Josh. Earrings, camp voice. Gay? Yes. He is matched with cart-wheeling, ripped jean wearing, surf lifesaver, Leigh. They talk cheer leading and atbletic moves, and laugh at each others’ jokes. They get on well and are both fairly normal and that = no airtime.

Back to Simone and Postman Pete. He has remembered her boobs and address but forgotten her name. Simone’s not willing to get down shots but she is good at getting things into her mouth without spoiling her lipstick. She goes to the toilet to talk on her mobile and sing “Fame, that bastard didn’t remember my name. When she returns to the table she orders the bill, then leaves Postie Pete to pay.

Next we have costume designer Emily who loves superheroes and sci-fi conventions (shout out to Windsong). She gets matched with Captain American Adam whohas brought his balloon blowing novelty toy. Emily comes dressed as Mortisha. Captain America comes dressed as Hyram Holiday (well that’s an archived memory). Adam gets the straw sucking, food crunching sound effects as he chows down like a pig at a buffet. The fart sounding balloon trick doesn’t impress Emily because she hates balloons, popping sounds and farts. Adam gets the bill right. Emily fails.

Then there is screeching Kiwi fitness instructor Moichell. She loves mullets and boys. She hasn’t had sex for 18 years. She has the familiar rtv grouper lips and overgrown eyelashes. She looks like a trash heap of bad cosmetic work. Too harsh? Well she moight be pretty under all that hot mess. Michelle gets a rather dishy young brickie named Tim, (who may be trying to crack into the tv business). Tim is polite and smiling. Michelle is like a drunk macaw. She is all over the shop.

I think Tim has been on another show too.

I haven’t disclosed the outcomes. That’s for guessing.

Decades of watching The Bold and the Beautiful have prepared Daisy to recap any show involving true lurve. Here, she takes a look at First Dates, which for some reason has been buried in a lateish time slot when it is not that bad a show. Over to you, Daisy (with thanks):

For those of you who are, like me Watchers of People, I have done a brief recap of a recent First Dates. Some people will do anything to get onto TV. First we saw Carmen Duncan with a man who scrubbed up all right. She behaved badly by leaving the phone on. He let her go Dutch. I’m old so that would concern me. He tried being funny and she laughed at his jokes. Carmen was happy, and he was really into her. Thinking they had found ‘the one’; someone with who they could “snuggle”, they both voted “stay” and walked out arm in arm.

Then we had a girl with an awful laugh, who I suspect was playing it up. Embarrassing. Her date only had hair on half his head, wore his old wedding suit, and was an amateur body builder, but was otherwise OK. There was no way he was going to be into laughing girl, and he wasn’t.
We had a young couple, neither of whom had ever seen a knife and spoon…or restaurant or table before. They shared a passion for chicken nuggets and chips. She was pretty. He was a plain-looking farm boy. They voted “stay” and left for Maccas, giggling about how “spatchcock sounded like penis. They both declared their 👍’ for each other but their 😫 for vegetables. Let’s not tell them how a chip is made.

Then we had DJ girl in the semi-revealing two piece. She got a self-declared well-mannered man, in a tight black and blue suit. He lived with his mum and learned from her how to be a gentleman. She chomped on her food like a horse eating hay. Again, I wonder, “staged?” She thought she had the goods, while none of his chivalry was on show when he made a rude comment about her eating and got up and walked out. Still, he got the finger.

I noticed we saw Richard Reid will be on in upcoming shows and another Geordie Shore regurgitation. Sadly, I think the show is probably being over man-handled by producers. I think we will call it pran-handled. We will probably see horse girl and hyena girl again.
– Daisy

Juz’s note: First Dates is on Seven, Wed at night. The blurb says: “One of Australia’s top international models, Simone Holtznagel, is looking for a tall man to meet her strict height requirements. At 203cm, will Peter prove to be a slam dunk for Simone?”
That’s Simone who was on Top Model as a youngster and then I’m a Celeb.

First Dates is back! Yay – always good for a bit of guilty pleasure viewing, and it’s not a big time commitment, like some other shows. I am really hoping mullet guy in this clip finds love.

Love is in the hair! 💕😍 NEW #FirstDatesAU, Tuesday 7.30 on @Channel7 pic.twitter.com/yOPzBr2El7

Anyone watching First Dates regularly?
I often am suckered in to watching a few dates while I’m flicking around the channels.
Tonight’s blurb: A young professional is looking for someone to build an empire with; a man is wondering if it’s possible to find the “best” girlfriend; and a self-proclaimed Greek god looks to settle down.
Well, they all sound like tossers, so could be fun viewing.
Seven, 7.30-8.40pm, followed by First Dates UK

Did anyone catch First Dates on Seven last week? It’s always good for a bit of fun. Unfortunately it’s not even coming up on my TV guide listings for the coming week and Seven hasn’t updated the show’s Twitter feed since last year, so it looks like MKR has bumped it.
Over to Daisy for her recap:

Hi stickybeaks of all things trash and cheesy. Married at First Sight is over, but to fill the void, we now have First Dates, which is similar but faster. Sort of MAFS takeaway. It’s worth watching if you enjoy watching weird people in slightly awkward, and hopefully romantic situations.
My recap is brief this week but I suggest you might enjoy a laugh if you sneak peek in your My Kitchen Rules marathon breaks. Last week we saw a return of our Serbian female security guard, the “curvy model”. She will never choose a guy because she is enjoying celebrity.
Otherwise we had all new ones. Pretty ones. Dorky. Mildly handsome. Boobs out. Boobs in. Chunky. Skinny. Picky eaters. Piggy eaters. Familiar with cuisine. And those who think seafood is only good if covered in batter, accompanied with chips, and served in paper.
Although there were plenty of ” No thankyous” to the offer of more dates, the pairs were far better matched than the sexperts did on MAFS.

The dinner conversations were not riveting but entertaining, and certainly strange enough for viewers to pat themselves on the back and think, “Hey, I’m not so weird after all”. I will be watching, in my pyjamas, with Woolif beside me; not the partnering of an awkward dinner date, but the result of a relaxed pick-up at Steve’s pub, Nedlands, and a “would you like a second date?” 😘

Is anyone watching the current season of First Dates? Now that there’s a lull in the reality TV scene I may skip through a few episodes.
Channel 7 must be happy with it – this is the third series in under a year.

First Dates screens on Seven, Tuesdays and Wednesdays at 7.30pm

First Dates is back, Tuesday, November 1. Will you be watching?
Preview here.
Remember these two? Seven surely has even bigger characters in store.

A reminder tomorrow is the finale of Channel 7’s surprise hit. If you can’t watch live it is perfect for catch-up TV. Seven makes the episodes available for 28 days.
The series has already been renewed so expect even crazier characters next time.
Here’s the preview for the finale:
https://au.tv.yahoo.com/shows/first-dates/video/watch/31158538/first-dates-preview/#page1