On Monday three teams will become two, and on Tuesday it’s the finale. I’m expecting the boys to be booted first.

We’re down to the final four but can we just hurry up and give it to the Giles sisters already …
Apparently there is still four weeks to go. Perhaps the unexpected departure of the vegans early on affected the elimination schedule.

Our BIGGEST challenge yet is coming… #9FamilyFoodFight, Monday 7.30pm on @Channel9! pic.twitter.com/mFF31UjhMB

Let’s hope the MKR-style “drama” does not continue for FFF, as we near the finale. Who do you think will win – and who SHOULD win?

How are you finding FFF so far? Certainly much better than the histrionics and “what’s a colander?” non-cooks of MKR.

Tonight (Sunday): Each family must fight to survive elimination. A power pick sees families face a controversial ingredient, but it’s Anna’s not-so-humble apple pie that really pushes them to their limits and causes one family member to walk. 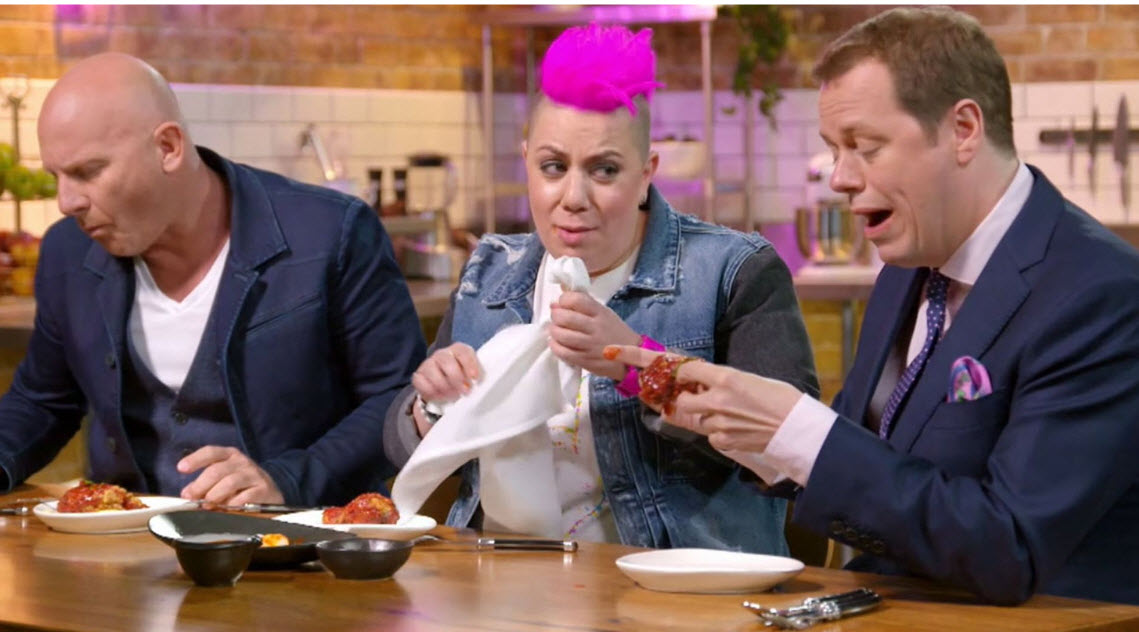 Since I watched the finale of Great British Bake Off the other day, I need to get my cooking show fix from Family Food Fight. Yes, there’s a bit of contrived drama and playing to camera but, generally, contestants have some cooking skills and are kind to each other.


Tonight (Sunday): A surprise two-round elimination will see one family’s time in the competition come to an end. To survive, they must face a quick-fire cook and Anna’s toughest challenge yet – a giant chocolate pinata.
Monday: It’s the trawler challenge: each family must brave high seas to catch their own crabs, and then cook them for 20 hungry fishermen. Competition is high, with the first game changer of the series on the line.
Tuesday: It’s an epic, two-part battle to be safe from the next elimination, where this season’s new game changers will be revealed. It all kicks off with a rival relay challenge, where some highly strategic tactics will be unleashed.

The most delicious competition is just getting started… #9FamilyFoodFight continues Sunday 7.00pm on @Channel9! pic.twitter.com/x7E4sFr3CB

Good to have FFF back now Aussie Survivor is finished.
7:30pm on Nine

Our families have no idea what's about to hit them. 😱 #9FamilyFoodFight starts Monday 7.30pm on @Channel9! pic.twitter.com/iMUbgl94dP

Channel 9 is promoting the second season of FFF, so I guess it will air after The Block.
Hopefully season two will run a little more smoothly and – thank god – they’ve cut the judges back from four to three.
Matt Moran, Anna Polyviou and Tom Parker Bowles are back, so Hayden Quinn ( the weakest link) is out.
FFF grew on me last year and the eventual winners served up some fab-looking Middle Eastern dishes, although they were lucky to survive some challenges where the judges set the rules.

Who has the secret family recipe to win? #9FamilyFoodFight pic.twitter.com/F8HRffoSii


Will you be watching FFF?

Channel 9 has announced Family Food Fight will be back in 2018.
Who’s happy (besides me)? Is there anything you would change about the show?
I reckon they need to ditch a judge. And perhaps fewer challenges with fancy pants dishes – the home cooking is where it shines.

Tonight the grand final teams are decided and tomorrow is the final episode.
I hope FFF is renewed, as long as they continue to cast friendly, supportive teams.
And by the way, Houda had her baby during the week: a girl.