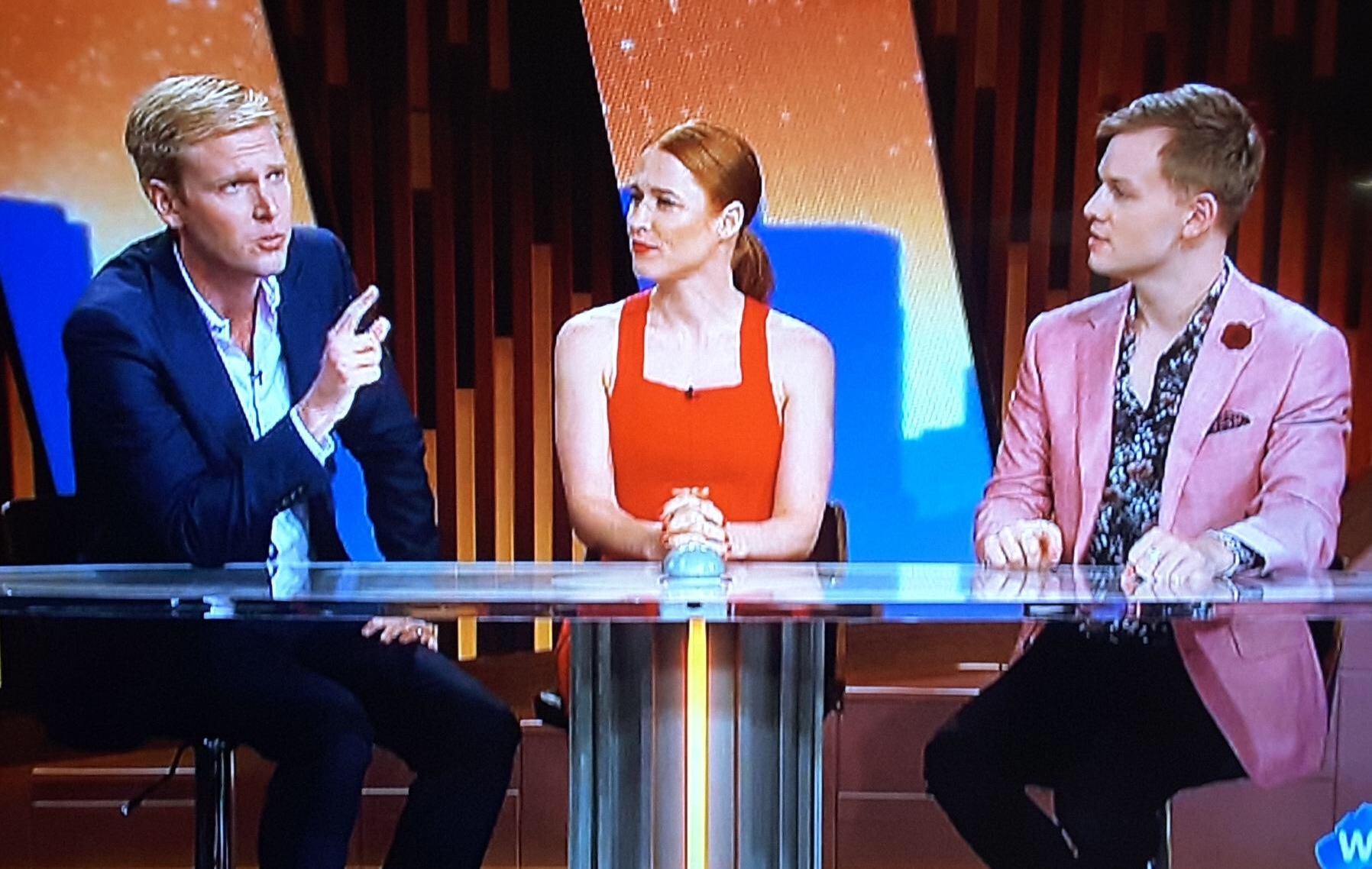 Show Me The Movie launched last year – it’s like Spicks and Specks but about movies instead of music. And not as good.
Rove and Joel Creasy are back but the talented Zara from Offspring (Jane Harber) has been replaced by Brooke Satchwell.
Over to Daisy for her “nightcap” recap:
Daisy’s nightcap:
When I first saw the preview for Show Me the Movie, I thought “Rove McManus and Joel Creasy; nah”. Also the preview was awfully lame, but when I found out that Mark Humphries from Pointless was a guest, I thought I would give it a go, just tonight.

So what we have here is a quiz show based on movies, obviously. There was a panel of three celebrities on each side, with Rove as host. The format offered up a variety of question styles, the way that Spicks and Specks and Talkin’ Bout Your Generation did, but with more of an air of desperation.

For me it was a 1 star because the production was as slick as a show on Australian tv in the 60s. I couldn’t get past my dislike of Joel Creasy and his attempts at 1 dimensional camp humour, and I found the rest of the cast pretty average. I’m still a Mark Humpbries fan, although I prefer him hosting rather than trying to compete for camera time with 6 not-so funny people.

But that was my take. QI it ain’t. It might improve with time, or get dumped. I hope that some of you enjoyed it, but I won’t be watching again.
Let me know what you thought of it.

It’s not a great show, the jokes are a bit try hard and their are too few questions, Rove spends more time announcing the segment than asking the questions

I also dipped into it because of Mark Humphries (wonder if the ratings were higher that night?). After about two minutes, I thought “these people are not enjoying themselves”. Somehow, apart from Mark, they all seemed like they were forced into the show and were trying to make the best of it.

If you want to compare it to Spicks n Specks, it is missing the Joy. Compare the hosts and you can see the difference. I am not a huge fan of Myf, but SnS is her sweet spot and you can tell she is thrilled to be there – Brooke was flat and disconnected. Alan Brough just lights up the screen but it is all natural, unlike Joel C who seems to be putting on an act all the time.

Pity, because it is a great idea, but they have chosen the wrong cast. Like SnS they needed movie experts who are not known celebrities, then fill the guest roles with celebs.

Alan Brough might make me watch. I think he is wonderful. Our son plays basketball on Friday nights so usually I am not around. Might try to see on catch up . . . But it doesn’t sound great. . . maybe I will not try too hard, lol!

Oh I didn’t know you were doing a recap of this show, thanks Daisy. I liked this show last year so am giving it a go this year too. Mark Humphries is great but is wasted on that pointless show Pointless. He is great at satire. He used to be on a show called the Roast on ABC a few years ago making fun of the pollies. Then he was on the Feed on SBS. He used to send up Barnaby Joyce calling himself Barabas Loins, he was hilarious. I can’t believe they’ve never had him on Have you been paying attention. He’d be great.

It’s good to read all your opinions. I was half hoping some others might have enjoyed it, but you all added to explain how I felt; that it was felt forced. It looked like the boardroom ppl decided they needed to make a show, but only had threepence to spend on it.
I don’t mind quiz shows, and movies is an ok topic, but, personally, I think it bombed.
Does anyone want to recap next week. Perhaps we should follow like a cult bad movie. I suppose they could lure us in by having one good guest again. But losing Rove and Joel would be good.

Rove looks like he is desperately searching for help and not getting it, so he is running off at the mouth.
The problem with the show is the two team leaders, and their lack of chemistry with anyone, lack of knowledge about movies, and their lack of smarts.
I could fix it but the whole thing makes me feel so lethargic.

Yes, I have glanced Brooke S on something else, and she seemed like a nice girl, but how does that qualify her for a tv show? The comedian on her left might have been funny, I don’t know. Even a good comedian needs someone to bounce off.

Also, I like comedy to roll naturally; to be quick witted but laid back. That’s why I find Julia Morris such a comedy fail.
Example, on Would I Lie, even with his mumbling Lee Mack beats David because Lee is so laid back.

Brooke Satchwell used to be on Dirty Laundry live with Laurence (Malcolm Turnbull0 Mooney on the ABC a few years ago. She was very good on it.

Brooke was great. Laurence Mooney, however , made a comment on an AFL program that he may or may not regret. He’s not much chop.

I think Brooke is good – why oh why did she ever get connected with Matthew Newton? And after seeing Joel Creasey on I’m a Celebrity I feel I have exceeded my lifetime ration.

I suppose he was the guy next to Brooke. I had never heard of him. If he was funny on SMTM, I didn’t notice. There seemed to be babble.

Lawrence Mooney is on the news again, because he invited Cass Thorburn (DWTS) onto his radio show so that she could talk crap about her ex, Karl, and he’s pissed off with her because she wouldn’t.
It’s hard not to side with Cass under the circumstances. But then again, many will not.

Lee, David and Rob are brilliant on that show. Lee was on 8 out of 10 Cats Prefer Countdown recently and managed to win a round with a three letter word and then later he got the nine letter word. The usually reserved dictionary lady was so shocked she did a super dramatic intake of breath. He was thrilled.

Rove and Joel Creasy are deal breakers for me but Mark Humphries is a talent for sure. He stands out like a gold nugget next to those two turds of television. Thanks, daisy.

Well, yes, Brooke probably was good on whatever it was I saw because all I recall was that I liked her. I couldn’t recall much else or even why because I didn’t watch whatever it was again.
So the flies in the ointment must be Creasy and Rove. And the slapped together production.