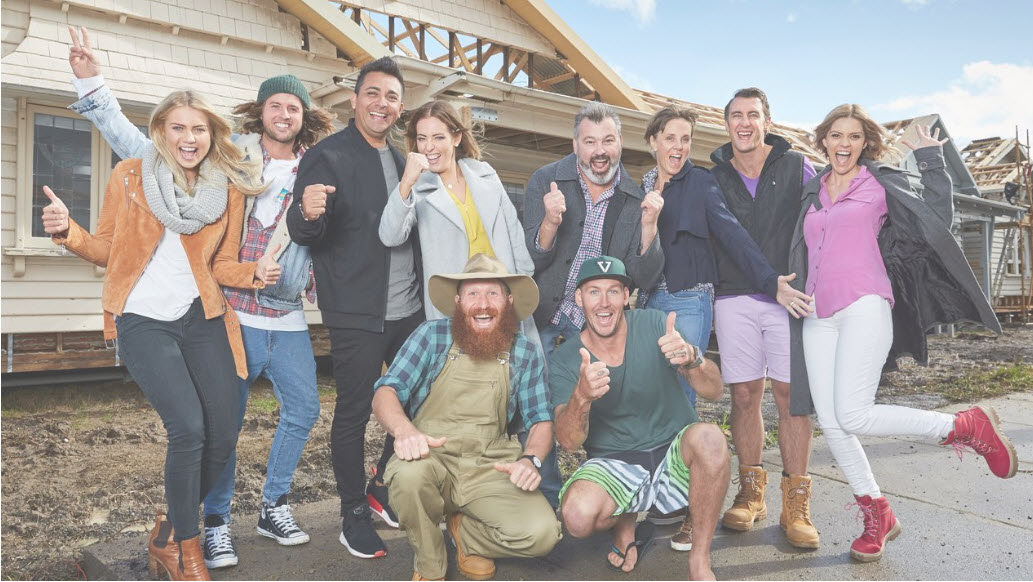 It’s a frantic race to the finish (cue footage of delirious people dancing and painting, then arranging Aesop products in shower niches) as the teams deliver their main bathrooms to the judges. However, one team doesn’t finish in time for tools down.
Not a good start to the comp. Who do you think it will be?
The Block, Channel 9 at 7pm

The latest trends are brought to life in TOMORROW'S Bathroom Reveals! #9TheBlock pic.twitter.com/r24jDgUSsl

Does Ch 9 expect me to celebrate with “Wombat” that he doesn’t know what “bespoke” means on an alleged renovating and decorating show? He’s a Numbat….numb between the ears.

I’m all for animal kindness, but this is one Wombat I want euthanized tout de suite.

I’m glad that I saw the small bits of $urvivor during ads for The $chlock. I was going to watch Hell’s Kitchen.

Yes, it is tragic that so many people go on renovation shows and do not know what “bespoke” means. Watch Kevin McCloud, to discern its true meaning because that travesty in S&W’s bathroom was not “bespoke” it was crap.

Scoring order is Darren, Shaynna and Neale.
Just in case anyone missed it Scotty name drops the two new sponsors. Volkswagon who is coughing up the weekly $10000 room prize and ipad.

TEAM ONE
The judges start with the Tortoises in House One. “How pretty,” exclaims Shaynna upon entering the room. Someone has consulted the thesaurus in the hiatus.
Darren observes that the tiles are intense on the eye. Noting that the tiles match the pendant, Neale denounces it as “overly decorative.”
In terms of functionality, the bathroom is spot on. It has hydronic heating!!! Since when has hydronic heating been a thing? Weird Victorians!
What frustrates Shaynna, is that they have chosen well the top prices items but have channelled their inner hoarder by cluttering the space (and wasting money).
Shaynna introduces a new term for the season of “face storage”…to us plebs…medicine cabinet. The tortoises bathroom lacks it as well as no drawers for storage.
Overall, a great room but they need to know how to edit. i.e. don’t spend money on crap.

TEAM TWO
The Queenslanders…Darren commiserates, “Bummer. Nice bathroom IF it was finished. The judges leaning towards groupthink are gentle (the Block must rate really well in the sunshine state). It’s a great shame as it would have been a superb room adds Shaynna. Bold in its intention, chips in Neale.
Shayna likes the layout. The have face-storage, blue tooth speakers. They like the tiles but they have overspent and it may impact them adversely come master bedroom.
The Queenslanders elected to do a WC. The judges hate the toilet. It is a mean toilet. The pendant is wrong for the space and it has a stingy splashback (a sheet of penny tiles).
Basically, they made a rookie mistake of choosing a fiddly tile to lay.
6.5, 3,6.5=16 (Yes, Shaynna really scored them a three).

TEAM THREE (BITTER LOSERS)
“I do love that pattern. Absolutely adore black and white,” confesses Shaynna. It is bold and contemporary chimes in Neale.
And from there the faults are pointed out, no face storage, one basin, hate the position of the bathtub spout and the location of the sole power point in the bottom drawer (WTF).
And if you have been watching all week, you know that the most important question is, was the acquisition cost of the speaker worth the admission?
Um, no…spend like that and there will be no money by Week 8.
9,7.5,9=25.5

HOUSE FOUR
In case you missed it Sticks and Wombat are from the South Coast of NSW. “Oh, this is a good size.” Shaynna exclaims. She loves the dramatic ceiling as it is an architectural success. In layman’s terms that is two skylights shoved in the ceiling by the sponsor. The symmetry is fantastic adds Darren. The luxury of the bathroom is the space comments Neale.
They have gone from fun to zen in seven days. Geez hope the script writer didn’t spend too much on that line.
The hardware is non-matching (but unlike the hatchet job they did on Team Nova for the same crime), we are told it is quirky and bespoke. (Personally, it looks shite).
9,9,8.5=26.5

HOUSE FIVE (TEAM INSTA) OH SO HUMBLE WINNERS
Hey, look at the architectural feature squeals Shaynna staring up at the skylights. The judges love the suspend plasterboard (aka ceiling) and the shadow box is really dramatic. Darren loves the play of circles upon circle but there is no face storage.
We are told that the design is at a professional level.
9,8.5,9.5=27

Thank you, Maz! I saw the Team Tortoise judging but then flicked to Survivor. Will watch today to see the much promoted round bath. And the sole power point in the drawer!

Thanks for our recaps Maz – here are my thoughts.
Jason and Sarah – in terms of negatives its better to hear ‘over styling’ was the issue rather than the actual bones of the bathroom – an extra candle or two in a bathroom isn’t going to turn buyers off at all compared to a bad floorplan. But I think Sarah has expensive tastes so they had better be careful there..

Even if Clint and Hannah had finished, can’t say i was a fan of all the different tiles etc will be interesting to see what the rest of their house looks like – though I have to say i can’t see how they can fix that bathroom other than an almost complete redo of the tiles. Wasn’t a fan of the toilet either – thou a good idea to make a separate toilet for the family bathroom.

Totally agree with the judges and Georgia about the speaker in their bathroom. Can totally see them running out of money very quickly – and agree with a comment I saw here or elsewhere not sure – Ronnie thinks because its expensive its ok… What i did like was one of my big questions finally answered – once they put an item in a room, they can’t it stays and can’t be returned so now they are stuck with the speaker – which i suppose stops teams going crazy for reveal then returning… i still want to know if they are able to add to the room thou or make changes…

Not a fan of the metal and pipes for Sticks and Wombat but they are certainly up there as far as male / male teams go.

I did like Josh and Elyses bathroom, but agree their vanity needs to be bigger. I don’t agree that every bathroom needs face storage, as long as the vanity is big enough. And if Shayna knew anything about makeup and skincare products she would know you shouldn’t keep that stuff in the bathroom anyways as all the steam and moisture isn’t good.

Dan and Dani returned a bunch of stuff in their season to scrape up some cash. I think it put the other teams offside (no surprise) but they said the judges didn’t like them so why should they keep them… Other people have sold stuff on Gumtree/side of the street/ to the builders but that was like their iron and vacuum once they’d finished interiors.

.@JoshAndElyse’s Bathroom is dramatic in all the best ways! 🛁✨ #9TheBlock pic.twitter.com/QlNvhqTYn2

There’s so much to LIKE in @Ronnie_Georgia’s Bathroom! 👍 #9TheBlock pic.twitter.com/ZuliVTZArq

.@HannahAndClint may not have finished, but their style is beautiful. #9TheBlock pic.twitter.com/fGXMctt8VJ

I think the person who writes these tweets does not pay attention to the judges’ comments! Definitely “styled to unimpress”.

Did anyone notice Ronnie pick his nose and eat the morsels, when they were driving home after the judging? Ewww! I have to admit, I had to replay it to prove I wasn’t seeing things!

I find it hard to believe that Channel 9 will allow Clint & Hannah to keep their builder after the shonky, handyman work he allowed in their bathroom. Has anyone seen him yet? Why isn’t he answering to Scotty, Keith and Dan on camera?

Anyone would think Georgia and Ronnie are the first to ever think of claw baths, ceiling roses, carpet, floor boards, you name it in a period home.

brain dead dave
Reply to  WHY

Yeah, Ronnie wants to audition for My Strange Addiction with that kind of stuff. The gig is to pick roses not noses.