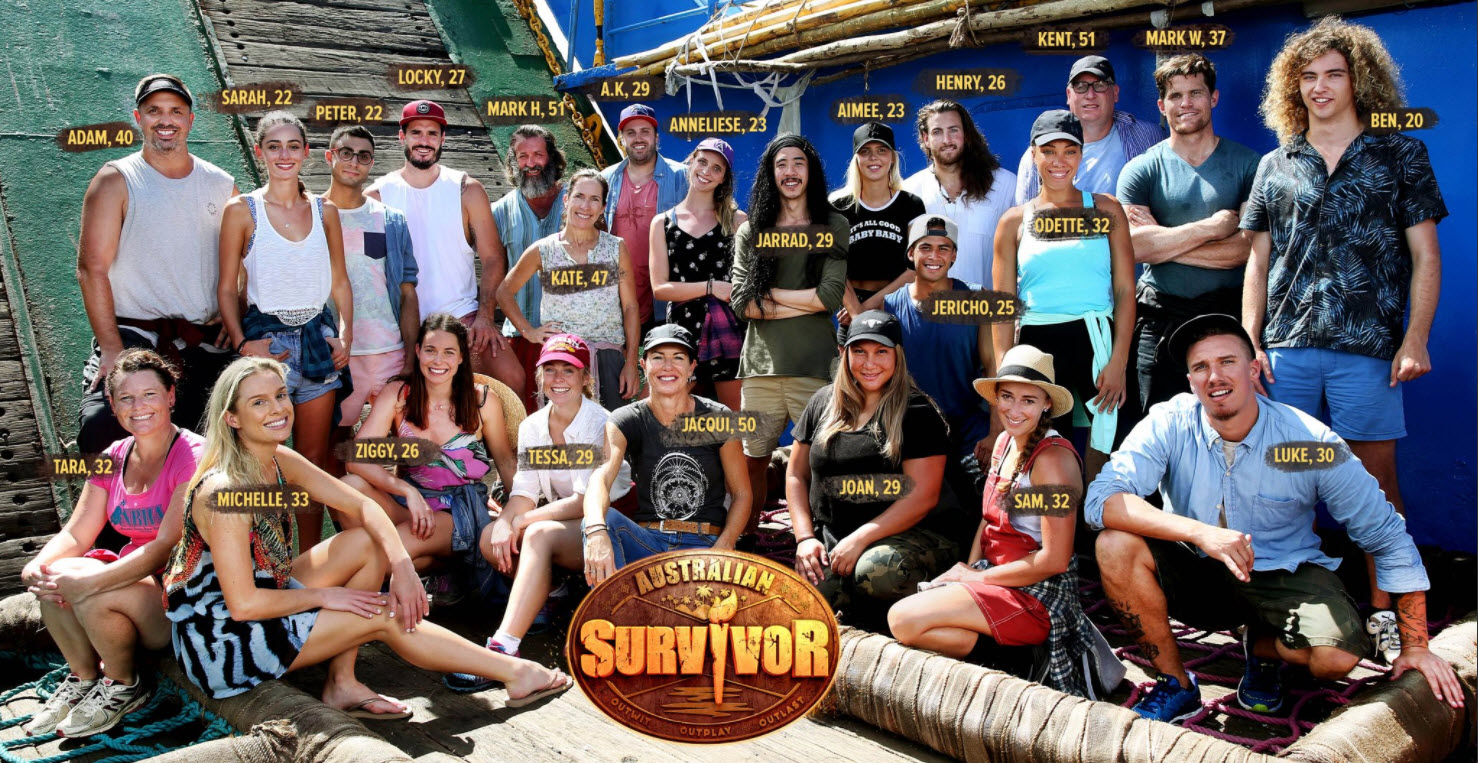 Ah, tonight it’s the good ole moral dilemma on Australian Survivor’s fourth episode. These always end in disaster for the person sent away from the tribe. Although thanks to the ads we know Jericho, Crazy Luke’s snuggle buddy, at least gets to eat a few bikkies.
And from the not at all subtle promos from Ten I guess Tarzan finds an idol and gives it to Tess, so if they do a vote split he will be going home and the producers will spit chips to have lost the Rupert of Australia.

SUNDAY: He's playing an honourable game, but what will Tarzan do that could change everything? 7.30 on TEN. #SurvivorAU pic.twitter.com/SFRUPODhnN

And it looks like we are now back to a more manageable two episodes a week, with Ten screening the action from Samoa on Sundays and Mondays.
And this is what the latest eliminated contestant from Pink tribe got up to:

There was only one thing that could cheer Kate up 🍔 😁 #SurvivorAU pic.twitter.com/9sbchgMezs

And here’s what my fellow Adelaidians Nick and Magic Matt thought of Tuesday’s episode:

Wow, that would’ve been an awkward night around the campfire. I gotta be honest, I’m finding Tara a little irritating, so I’m really siding with Tess (even though I barely know who Tess even is. Was she just on a contiki tour and she wandered onto the set halfway through filming, and nobody noticed?).

Props to cute little Jericho for his overall game-plan, playing the young innocent religious boy while overtly planning to knife his tribe-mates the first chance he gets. The American casts can get too obnoxious with, “I’m religious so I’m a good person and how dare you betray me when I was planning on betraying you?!” type shenanigans, but I always think, you volunteered to be on a reality show for a huge prize reward, perfectly willing to do whatever you have to, to win. But Jericho seems to be using it to his advantage, so, there’s that.

I still don’t understand the “Tarzan” nickname. Is it just because he has a beard? Wasn’t Tarzan young and all muscled? Shouldn’t Santa or Long John Silver be more appropriate in this case?

I find Tara super irritating so I’m also definitely team Tess, from what little I’ve seen of her she is infinitely more watchable.

I’d be happy for Teal to lose the immunity challenge and I’d really like to see smug Sam get turfed.
Lee from last year’s ad can also be turfed.

So Tarzan picked the firewood, and Jericho snuck away with the cookies.

What I’m most interested is when the teams unite at the next challenge, and Tarzan mentions the temptation and that he picked the wood. Will the entire pink team suddenly glance around at each other and wonder who’s holding out?

Does anyone else think that the jar of cookies has gone to Jericho’s head, just a little bit?

I did think his plan for world domination built on cookies is a little disproportionate!!

Yes. I am hoping for a backfire.

I remember early on the franchise when individual immunity idols were rare as hen’s teeth. These days, they seem to grow on trees and be slightly more numerous than leaves. I like Tarzan deciding to not only do something contrary, but aim for the head of the snake. I’ll miss Locky, and I think it’d be better for the team if they waited until closer to merge to oust him, but the target on Tess is forcing Tarzan’s hand.

Given that she wouldn’t end up on the jury anyway, maybe it would’ve been better if he’d kept it secret and just let them eliminate Tess? I suppose it’s a calculated risk.

If they were all voting for Tess, couldn’t he just give her the idol and the 2 of them vote for Locky?

You’d think that was the plan, but for some stupid reason, even Tarzan didn’t go along with his own plan to vote for Locky.

Glorious tribal council tonight. Tess is right, though. And I liked her calling out her team-mates. An alliance of 8? That can’t possibly work in the long-term. Two tribal councils on, and things go south for everybody. She also didn’t give any indication that she has an idol in her pocket, so the resolution on the vote should be hilarious.

Although I wouldn’t put it past AK to have spilled the beans to Locky and friends.

Part of me hopes they keep Locky and get rid of Tara. Anyway.

Damn it, Tarzan, you were too good for us.

I don’t think it required AK to turn traitor. They probably split the difference and gave Tarzan some votes as a just-in-case (and it turns out, Tess did have an idol).

But hang on. During the montage, both AK and Tarzan voted for Tess. If they’d actually voted for Locky (instead of wasting their votes. Why on Earth would they do that? I can see AK turning against Tess, but why the hell would Tarzan negate the vote? It was *his* idea to go after Locky!), they could’ve at least forced a tie.

Yes none of that made sense.

I think they thought everyone was voting for Tessa and they could get rid of Lachie with just one vote and then no- one could have been accused of flipping. If they had voted for Lachlan it would have been 3-3 and a revote, Lachie’s little harem would’ve voted Tarzan off anyway.

The minute Lockie acted surprised that Tess said he was on top he lost me.

What I picked up from this episode is that Locky is *pretending* to not really know what’s going on, in terms of his alliance. He has half the tribe wrapped around his finger, as Tess pointed out, but I think he *knows* it, and he’s acting innocent.

I wonder if that’ll come back to bite him after merge? Then again, if he ends up on an individual-immunity rampage, it’ll end up biting everybody else.

Definitely an act and not a very good one if you ask me and I think the girls (with the exception of Tess) are just stupid to fall for it.

I had thought, for the first few episodes, that Locky was dangerous because he’s a physical power-house, which he is.

But I think he’s dangerous because he’s got the mental game happening as well. He’s more switched on to how this works than I thought. And he’s definitely using his own charm to pull people towards him. I mean, it’s good strategy, but Tess has figured it out, so I imagine everyone else well as well.

At any rate, did you see the wide-eyed look on his face when Tess played the idol? He actually voted for Tarzan, and I think he just realised that they ended up sending home one of the only physical power-houses (aside from him) on the tribe. That’s gonna hurt them in the long run.

When an alliance thinks they are so many and have votes to spare, they have nothing to lose by splitting votes, even if they doubt someone has an idol. But Tarzan was hopeless at keeping a poker face.
BTW, he was/is kind of a spunky old pops; like a hippie Jesus.

See, I don’t mind it happening this way, because there hasn’t really been any producer interference. The team is falling apart the old-fashioned proper way, by losing challenges, having their alliances tested by the nature of the game, and picking each other off one-by-one. That’s the way it should be, dang it.

But yeah, I wonder if losing Tarzan is going to really hurt them, going forward. Tess is next on the chopping block, then AK, and then who?

I reckon tess has got s shot st making AK go next. There will still be residual distrust of him and she might be able to convince them that he voted for lachie?

Will they believe she voted for Tarzan thou?

It was not in AK’s interest to flip yet. A tribe swap must be looming. I am wondering if Henry will betray Jericho’s confidence. Did enjoy the Cookie Monster and Elmo having fun.

And did you see the promo for tomorrow’s challenge? Looks like the clifftop where they filmed the epic Lee V Kristie final challenge last year.

I misunderstood that cookie dilemma. I thought they could keep them to themselves or share them with the tribe. Tarzan could have done what Jericho did & taken them & shared with a couple of his allies.
Damn I thought Lockie was going to be blindsided for a minute there. I thought Tess must have betrayed him & voted for Tarzan when there was only 1 vote for Lockie, but Tarzan voted for Tess. Very strange, it was his idea to vote for Lockie. I thought she wasn’t going to play her idol. She paused for a while before handing it over.
I was hoping there’d be a swap next episode but doesn’t look like it. They must be due for one.

thats what i was thinking with the cookies too Carole, i actually thought he was going to bring the whole jar back and share it with all of them. (that might have been against the rules thou).

That was disappointing. And weird. Lochie and Tarzan seemed have had an alpha male friction but Tarzan was the nicer of the two. Lochie has turned into King Lochie like others before him who created a harem. It will be hard to knock Lochie of his perch with so many gullible followers going along with him.

I would have liked to see Tessa play the trump card – the hint that an all-girls alliance has formed. Any male player with a harem is always afraid of a mutiny.
Maybe she will save that one for later. I admire her fighting spirit. She did have some luck by becoming Mark’s favourite but she has also fought every step since she has been targetted.

I can only assume AK told Lachie and co Tess had an idol OR Lachie got suss when Tarzan confirmed the plan as asked about a decoy vote… Although that still doesn’t explain why Tarzan voted Tess.
I’m getting a little annoyed at the editing, starting to give away what is about to happen. Other than the moral dilemma barely any footage at teal tribe and the tribal vote seemed too easy / obvious that i kinda figured Tarzan might go.