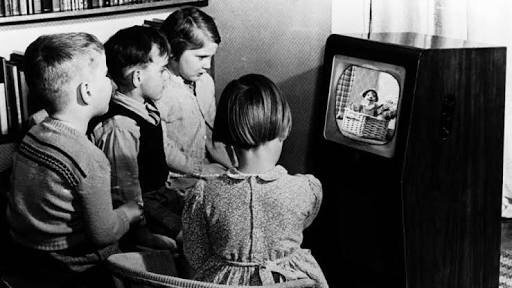 By Bobi
Daisy’s last post had me reminiscing about the good old days.

A time of children playing outdoors until dusk: where there were enough of us to field entire touch football teams but not enough to play AFL; of cricket matches where hitting the fence was a four and over the fence was a six; where what mattered was turning up rather than your skill set or gender.

I also have very fond but vague memories of watching a black and white television but a better memories of “someone” having to get up every time we wanted to change the station – not that it mattered particularly as there were only three channels. For some reason, I was the designated rabbit ear mover and there was perpetual snow on the screen during my favourite shows.

This is not a photo of my family but, trust me, no one I’m related to can tell the difference, right down to the home grown hair cuts.

I used to rush home to get to my favourite TV shows before the boys. Mostly I failed. There were more of them and it was a losing battle.

I was a huge fan of soaps. I never missed an episode of Bellbird right up until the death of one of the characters who fell off a silo. I was shattered and the vision haunted me for years.
Still, that will never be as tragic as the death of Patrick on Offspring to me. I will never forgive them for that.

But my overall love of soaps remains cemented in my psyche. My niece (that’s a nibling) and I bonded over The Bold and the Beautiful.

I have no idea why it was Bold when, initially, I was obsessed with Days of Our Lives – especially after watching an interview with an actress (call me old fashioned) talking about being pregnant for 14 months on the show and how her son on the show was only four years younger than her in real life. She had a lovely sense of humour and I was enamoured with the tongue in cheek of it all. Where has that show gone?

And who cannot forget that lovely movie, Soap, with Sally Field. I’ve loved Sally since I first saw her in Gidget.

It is all so far from real life that it is almost comedic. In the current horribleness of 2020, this stuff is like having a warm bubble bath.

Thanks, Bobi. Loungerooms were so small in those days that it was no big deal walking to the TV to change the channels.

Dad would sit with his feet on a poof (who knew the word ottoman back then. It meant a foot cushion no more) and kids were charged with channel- changing.

Hey Daisy, The Drum spent the last 10 minutes of last night’s show talking about whether you should, or should not, take your loved one out of a nursing home.
Not unexpectedly, they did not come down on one side or the other, which is why I like to watch, but it was still an interesting discussion.

Yes, thanks. I saw most of it. What I drew mostly from it was that we aren’t valuing and respecting our old people and the govt doesn’t invest enough in retirement homes.

I read an article about the tsunami of elderly coming down the pipeline, mainly woman who for one reason or another did not have children, and how the aged care system is not equipped to deal with all these people without family support.
And then there is the increasing number of homeless woman and woman without superannuation.
You know, no matter how you cut it, woman are screwed.

It says a lot about the importance of the family structure.

I enjoy The Drum …..On nostalgia, the home I live in is 100 yrs old and being upgraded, I’m living The Block .I’m reading the comments ,but busy for a few days. Not living in a tent, $cotty, no chump suit.

How many wine fridges will you have, BDD?

I’m living nostalgia right now, because my tv remote keeps losing one function after another. The latest, and best, is the volume button only working on up volume. So I’m getting up and using the buttons on the back of the tv to turn the volume down. I was really cranky the first few days I had to do that, but then realised what a small problem that is. I just get my butt off the couch and adjust things manually as often as I need to.

I’ll replace the remote but it doesn’t seem like a big deal right now.

I love the photo of the brother and sister. We had a strict “one cuts the other chooses” rule and honestly, a micrometer could not deliver a more precise measurement than a sibling wanting to be sure they were not done out of a crumb of cake!

Being the oldest amongst siblings I recall being the “share/counter” at would have been the late 50s/early 50s. Kids in a circle, “One for you, one for you, one for me”. Yes “one for me”. I was a nice big sister… except when my sister left snotty tissues on our bedroom floor. Then I slapped her, got told off by Mum, then I bear-hugged her, and got told that wasn’t allowed either. 50+ years on she’s still messier than I am.
To be fair, we didn’t fight much.

My brother used to pour the two glasses, measure them with his eye, decide that there was more in one than the other, have a little sip to even them off, and then say, “There. It’s exactly the same,“ with confidence.
I fell for it, every time.

🤣🤣🤣
We used to ride our bikes up our steepish road (and not get puffed), then come flying down doing tricks, such as standing on our bike seat, or putting our feet on the handlebars. No helmets. It was called playing. Now it’s called “Too dangerous” and “Breaking the law”.

I enjoyed childhood but I enjoyed my teens more, even when my heart got broken and I cried to Touch me in the Morning, by Diana Ross, sad Aretha songs and When Will I See You Again?

I cried to Gene Pitney’s It Hurts To Be In Love. Ack. I still remember the heart breaker’s name.

I never dated anyone until I was in my 30s, but I remember falling in love with a straight boy when I was 16. Gosh, that hurt. In that special kind of heart-break that only teenagers feel.

Bread was delivered when I was a boy……by horse. The new Coles supermarket trashed a lot of local small businesses. Goodbye butcher, grocer, greengrocer who delivers fresh veg by ute. No plastic invoved.

Plus a macabre history of sicko crimes in Adelaide.

I’m envious of the steam train part of your childhood :).

Oh trains were great Windsong. They had great seats and seating areas, were bumpy and went choo choo.

And trains *should* do those things. Electric trains are nice, and all, but they just lack the romance and sense of adventure.

And you can still get those trains. A favourite part of my childhood was visiting grandparents in Mossman, FNQ.
Cane fields.
Trains galore.
And I’m sure one or two of them still run for the tourists.

A fond memory for me was going to beautiful places for picnics or holidays, that were really close to Perth, or even further south, that were still undeveloped holiday places with shacks. They are all suburban now, except for the “Holy Mile” (local nickname) at Vasse. It’s unspoiled because it was donated years ago, to churches, Legacy and Scouts for camps. There is one commercial property at the end of it, called Siesta Park. That’s where we like to go because it’s old school; huts and cottages by the beach. It has no tents, caravans or multistorey blocks, except for two three bedroom cottages.
When we were kids we went to Rottnest and Safety Bay for holidays, and Busselton for annual Legacy camps. We also stayed in a shack at Safety Bay once. Most of these (not Legacy Campsite) are suburbs now. Rottnest has been developed for international tourism.

The ONLY people I knew who went overseas when I was a child and teen were my grandparents, my uncle who lived and taught in Japan, and my step aunty and uncle who lived in Rome and went to Bangkok in the 60s.
No kids ever holidayed overseas like they were doing pre CV.

Ditto re people going overseas. One of my friends went on fancy holidays each year…they stayed in hotels.

We stayed with rellies. Or one very memorable night of six of us in a Holden in Dubbo (the one and only time Dad gave in to Mum’s begging to “be spontaneous” and not book ahead).

I used to go on holidays with my parents all the time. Every couple of years, we’d travel overseas somewhere nice. I saw a lot of Asia (loved Thailand), lived in America for six months, like, that was our thing as a family.

But my passport lapsed after a graduated high school, and I never felt like getting it renewed. I tell that to people and they react with horror and amazement. “Don’t you feel trapped?” Not particularly, I mean, yes, but for a myriad of psychological reasons, not because I can’t hop on a plane.

Another thing I loved was piling into a Holden station wagon in the 60s with my 6 cousins to go to the beach or waterskiing. No safety belts, no rules about kids huddled in the back. But quieter roads without meth fuelled drivers.

DH’s family travelled about 15 of them in two kombis, with the seats laid flat and all the kids lying down in the back. Only Sydney to Toukley, but far enough for a serious accident!

Stumbled upon this online and it features my fave ice cream from the 80s: the Raspberry Cream. It was sooo delicious! 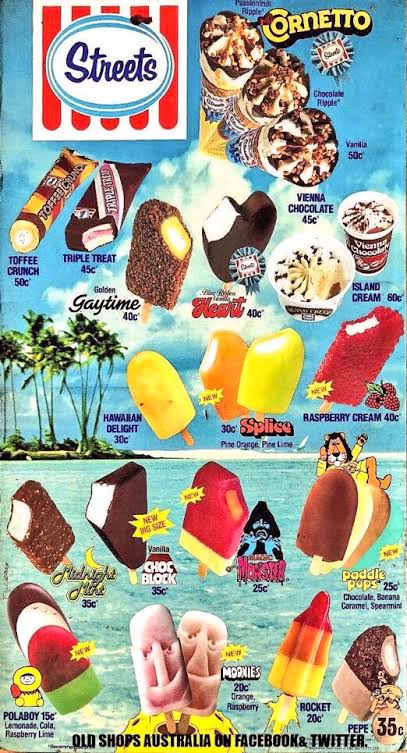 My parents would usually get a Heart.

Wow, that is a blast from the past. 20 cents for an ice-cream? Damn.

Ha, we had that as well when I was a kid. Calippo was usually the favourite. You had to warm it with your hands and carefully press it out. 😉 And there were like fizzy pearls in the ice cream. It was awesome!

Raspberry cream for me, too. I hadn’t even realised that they had disappeared. ❤️❤️❤️❤️