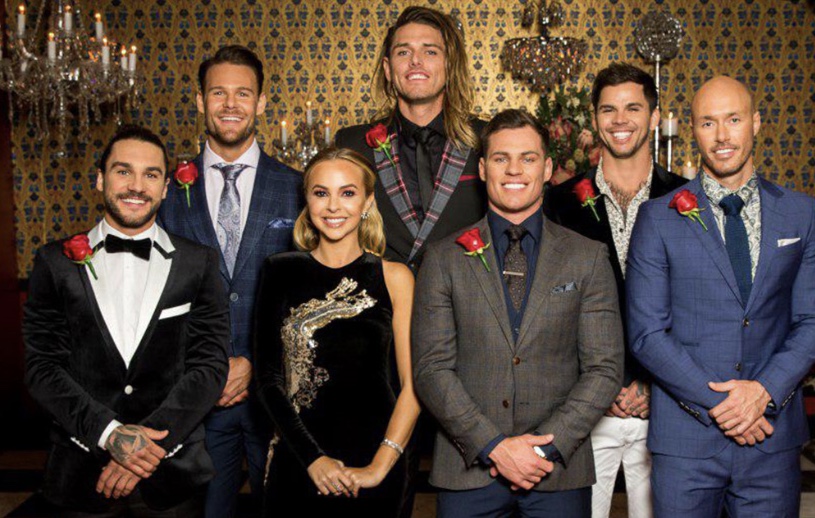 How can it be home towns on Thurs when we still don’t know Kinda Keanu? And BMX dude has not had much time.
So final four must be Timm, Jackson Dog Guy and umm Carlin?

You were absolutely spot-on, Juz. We’re in the end-game, and the final four guys left are Quirky Timm, Bald Ryan, Speedos Jackson and Too-Handsome Carlin.

I’ve never thought of Carlin as her type, and I still don’t think she’ll pick him. Timm’s too damn quirky, and Ryan has a secret agenda that she’s just starting to figure out … so at this point, my money’s on Jackson.

I watched the ads for home week.
Things don’t look too good for Carlin.
I’m assuming his brother is not too fond of him and then he does that gaslighting thing. It’s seems like Carlin might be a bit of an a***hole. Surprise!
Baldy-boy is not looking so bad now but he still lied – twice.
It can’t be Timmmmm. He’s too odd so that just leaves Jackson. I don’t remember much about him. Sneaky editing?

Jackson’s the one who was rocking the blue speedos when they were lounging by the pool, last week.

That is pretty much the only thing I can tell you about him.

And he tried to poison coeliac Angie with a pie. I think Angie really liked Ciarron

Too bad Ciarron is Carrion.

Jackson looks like one of the sons in The Sullivans.

Best lip job for Carlin…have them sewn together, pal.

On Carrion names, my friend was going to give her son a family name from her husband’s side. She was going to name him Carrier. So much teasing. I said, no don’t. Anyway she ended up calling him Sage. She’s young.

Jackson family run a pie company. Very popular in Sydney and now they are trying to get into the US market. His father was a former NRL player. The whole family are fitness freak but Angie is not.

Didn’t there was a story about how unfit Angie was and the guys were not actually interested in her. Good luck to whoever she picks. Also rumour that if the guy she picks can stay with her for 2 years, he gets $100,000 bonus. Money can buy love for 2 years

Interesting, Littlepetal. And kind of embarrassing. 🥰 💵💵💸

That’s the problem with dating an Adonis who’s obviously spent a long time on sculpting and perfecting his own physique … he’s only really going to go for someone who’s the peak of physical perfection like he is. Physical attraction might be overplayed, sometimes, but it’s still a thing.

They may have offered $100,000. It doesn’t mean it would be accepted by the Chosen One.
And it also assumes that Angie wouldn’t be the one to leave. She’s pretty quick to turf those that she doesn’t like.
It would be a high risk proposition to put your life on hold for so long – play-acting – with the odds being that Angie would cotton on eventually and then there’s no money for your effort.
And some of these guys are struggling with being good guys for 6 weeks.
And what would you do when she starts talking children? Which she is already.
And if Australia found out, your love life would be ruined, as per Honey Badger.
It doesn’t make sense.
But just in case it’s true, you would have to be a real grub to do that to someone without their knowledge.
So you would have to pay them both (perhaps Ali and Whateverhisname did. That relationship doesn’t make sense.) but I doubt that Angie would go along with that.
And let’s face it, there’s no way Timmmm could keep that a secret. He has no filter.

I think everyone has just naturally reached the point of being super-cynical about this franchise.

And, for me, Angie just isn’t a good fit for the Bachelorette. It feels very contrived, a stunt more than any actual desire for “love” (or whatever passes for it on a contrived episodic reality TV dating show).

To me I think Angie thinks she is a celebrity now and behave like one. She is different from the girl on googlebox.

Isn’t that funny? One of the things I like about her is that I see exactly the same girl that was on Gogglebox.
Except I hate the new red lipstick.
We see what we see.

I’m not sure Carlin’s a good enough actor to be on Neighbours.

Yeah, get away from Jackson, Angie. His Dad is a piece of shit.

I’m glad I wasn’t the only person who picked up on that.

Did you hear the father’s interview that he would refuse to let Jackson move north, if he and Angie got together?

Um, big guy, that’s not really any of your fucking business, is it? I know a family business is a difficult thing, but that does not give you the right to treat your children like prisoners. Like, what the hell?

You get the feeling anyone not selling their soul to the family business will end up in one of Pop’s pies. He’s crushed Jackson’s ability to have /express emotions.

That entire segment was like the lead-in to the mystery on an episode of “Midsomer Murders”, wasn’t it?

Yes, you are. Piling lie upon lie.

Back to the prison of the family pie factory for you, Jackson. He talks so quickly, he was hard to understand anyway. Why does Osher whisper when Jackson is euthanased?

I think Timm is the last chance saloon for Angie. Carlin and Baldy have blown it.

From all the hometown visits, Angie is having doubt with all of them. If there is a choice, she will not pick anyone. But she has to. No more Honey Bager.

Carlin got busted. Before The Bachelorette, all his public listings has acting as one of his career. Now they are all deleted.

Carlin is no darlin’

I thought about Honey Badger’s boycott, too. Angie has a choice from Hell.

Still got his IMDB page though!

There was a lot to unpack from tonight, wasn’t there? Honestly, there’s moments where she’s looking at the guys left … and it looks like she’s not that excited about any of them.

I think ditching Jackson was more about ditching his overbearing father than him.

As for Carlin, I felt quite bad for the guy tonight. Given his deadpan delivery to Angie about his feelings, I think we can safely say that he’s not a very good actor at all (at least, he’s not good at emoting dialogue), so you’d think that Angie would’ve seen through him by now, if he was there for an ulterior motive. More to the point, I liked that Carlin pointed out the hypocrisy of it all. There’s nothing to stop the guys thinking that Angie’s just there to pursue her TV career, and that fact she shut him down (and got quite whiny) every time he tried to talk to her? Yeah, that seems like an equal partnership. But I definitely felt like he was treated unfairly, by both his brother and Angie.

Speaking of which … damn. Between Timm’s jealous bestie, Jackson’s tyrannical father and Carlin’s asshole brother, my gosh, these were some of the crappiest families ever. Lord almighty, with friends like these, who needs enemies?

I know, WS & BDD. All the families were crap.
Are we sure she couldn’t choose the HB option?
And Good God, Jackson needs to be worried for a whole set of reasons that psych students are going to write papers on for years. If he doesn’t obey his father, he’ll find himself in one of those pies.
Maybe the producers will let her bring back “someone”?

In Sophie Monk’s season and Angie’s, it looks like the producers dredged sewers for partners. I prefer the Bach’s to be unknown and the hopefuls not be such droobs.
It can be done. Most of the people in Lust Island are okay. Youngish, trashy and not dumb, but still better than the Bachette droobs.

Might as well bring back Bill. I may have been too harsh on him. The pickings are slim.

I watched last night, and couldn’t belueve whats left! She has poor taste in men if Timm is in final 3. Didnt see the pie family perhaps there’s a catch up today. There seems to be no lurve between any of them although Timm’s friend was almost salivanting over Angie. May have to watch the rest now.

Maybe this will help.
It was a train wreck.
And Timmmm’s friend was salivating over Timmmm (or his mother, hard to tell which), but not Angie. No woman will get past “the bro”.
https://www.marieclaire.com.au/bachelorette-hometown-reactions

Thanks for hilarious link, Bobi.

“It’s weird that Timm actually has parents I thought he just emerged out of a fire pit at someones backyard rager one day, ready to party

“Doing a Honey Badger” could become a thing.

She’s gonna picky the lying baldy, isn’t she. I wish Ciarran was still in it, to give a bit of colour, and sincerity, and heart – and some mad suits.

Baldy couldn’t maintain eye contact with Angie whilst explaining his lie away on the beach. Run, Angie.

Carlin tells Angie ” You can’t fake feelings”. Not long after this he’s trying to wipe away tears~ that aren’t really there.

Frankly, I find that disturbing from a guy who wants to be an ACTOR! Give my regards to Boredway , Carlin.

😂😂😂😂😂
Third World problem bu I am missing the 👍👍👍👍 The comments make fun reading, and I’m not watching. Poor Angie looks like one Mm Trousseau’s wax dummies because her face and.lips can’t move

It’s that red lipstick. It’s making her face slippery and her lips pouty. She’s afraid to move – that stuff gets every where – and it’s making her self conscious. I speak from personal experience here.
And that’s why she looks so much better in the pink. She can relax.
Cheap production.
I wonder if that means they’ll go to the Gold Coast for the great unveiling?

And just changing the subject for a moment, I don’t understand the need to lie.
What’s wrong with being a part time Actor Slash Model? Is it shameful?
And what’s wrong with applying for the show, possibly more than once, if you are seeking love?
If you are going to lie, it should be over something serious – make it worthwhile.

Wow, Timm’s friend really threw him under the bus. I think he’s jealous & doesn’t want to lose his partying buddy.
So it appears Jamie was right. I wonder if he was yelling at the TV ‘I told you so’.

I just saw an ad for this. Playschool’s Jemima could act better than Angi. The things people will do for a dollar.

Jemima is THE BEST Play School got. I do not understand why Big Ted gets alll the glory

I know, she is!
It’s the yellow bear patriarchial thing that been going on for 2000 years 😉