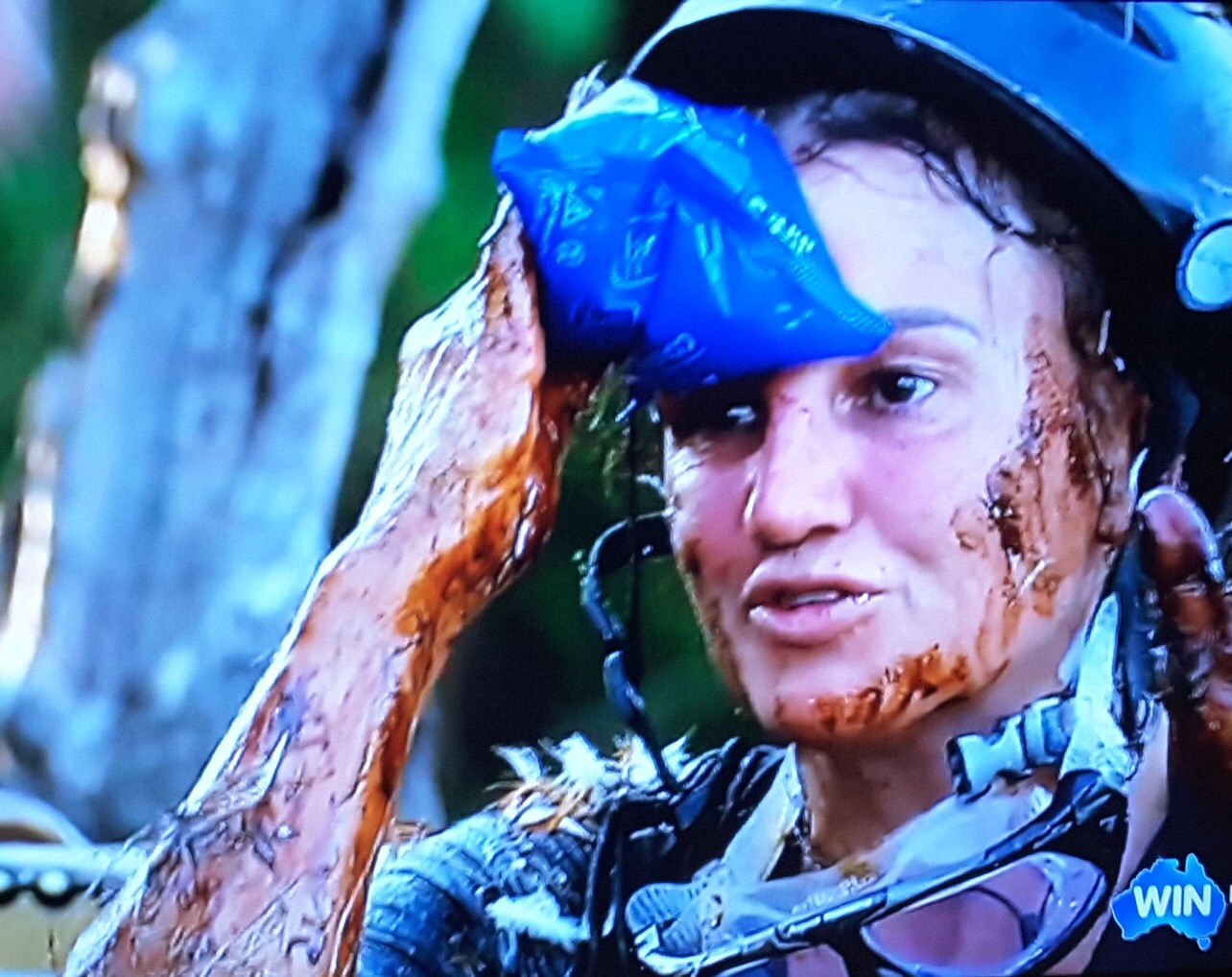 Lambo was booted from the jungle last night and now the other celebs will follow quickly.
Over to Daisy (thank you) for the latest action:
Because we are in our final week, I will try to do a nightly nightcap. 🍸 As some of us guessed, Jacqui was out tonight. I watch IAC for the entertainment, and in that, she didn’t let us down. You can’t say she was weak or boring. She was bluddy tuff moit. There was plenty of footage for her departure portfolio, including the moment she got an almighty whack on her noggin.

Now back to the start of the show. Brooke and Justin did a great job of the Tucker Trial. As usual, Justin took his trial buddy under his wing, but Brooke, being a regular Iron Man competitor, didn’t need much help. Justin came back with a blue sash, at which most of the camp gave a gracious cheer. Angie needs to learn how to celebrate another person’s success. Could her scowl have been any more contemptuous? Anyhow, most of the campers were just thrilled that he and Brooke had returned victorious with 12 stars. It’s a shame this isn’t going for another week. Brooke is just starting to have fun.

Tahir is now the camp chef, and annoyed everyone with his egg-cracking skills and his tea-time comedy. Justine has also come out of her shell. I loved when she hid Tahir’s violin so that he couldn’t be a pain in the morning arse. I am only just now starting to realise how beautiful Justine is. I think it’s because her fun side is showing. 😜

Tonight’s little activity was the old exploding meringue. It was a bit of fun, but sugar over-load for starving campers. Justin threw up for the first time, and Luke looked like he had eaten an entire lolly shop. The other activity was the notes from loved-ones. 😴😴😴😴😴 from moi, but men everywhere sat up, alert at the image of Brooke walking around the house naked, making coffee naked, cooking dinner naked, loading the washing machine naked, watching The Bold and the Beautiful naked. OK, that’s going to change my B&B viewing.

My favourite LOL moment tonight was when Justin cheekily said, “You don’t need a university degree when you’re popular”. What a saucy ratbag. I think he is being tongue in cheek. I also enjoyed Justin thumbing his nose at forced fitness, but I suppose some of you might think he was being a jerk.

Now back to Jacqui’s departure. She seemed bright-eyed and bushy tailed about leaving. Who will be next? Brooke and Natasha no longer have immunity.

No problem, Daisy. Perhaps you could comment each night to say who got the boot. Twitter tells me it was your girl, KKL

Well, I am not surprised it was Brooke ronight, but I would have preferred Tahir. I think the bottom 3 were Brooke, Justine and Natasha.

I have never seen Justine on tv much, but I am finding her delightful and I hope she lasts. She lights up when she smiles. Hey, here’s an idea….Justine for Bachette.
Justin for Bach and Justine for the ‘ette’.

Youse should see the tight black Nigellaesque sweater Justine is packing on her show today. Straight after Judge Judy in first five minutes of her show. Wow.

Then J’s into pigtails and cossie change for the next dish. No dull moments

I’m in. For Justine I might turn from asexual.
Definition of asexual: someone who prefers pasta, wine (no thanks) and rtv.
Most of you probably can’t say it’s a preference.

I will be watching to see if there is a glimmer of Jungle Justine.

I won’t be sorry to see the last of the ‘comedy (not) duo of Chris a Julia. Julia’s routine is ‘blind drunk person thinks self is hilarious and holds rat’.

Yes I can’t imagine their new show will last long. People watch I’m a Celeb in spite of Chris and Julia (particularly Julia) not because of them. I couldn’t cope with a whole show centred around them.

I tuned in for the last few minutes to see who got eliminated.

I did feel sorry for the B and the B lady. She seemed genuinely upset at being sent home after, I think, only a week. Kind of like how any of us felt at being picked last for a game at recess in grade school.

Goodness, I almost teared up, and I don’t know her or watch her show.

She visits Australia regularly so she might have felt rejected. Also that never happens on B&B. There, she is every man’s desire.

I can do a recap for you (with the caveat that I came home late and missed chunks of the show).
Justin continued to be annoying, Tahir (autocorrect wants to say T-shirts) is becoming really annoying and can go next, and Evie did a selection of dances from movies that was truly amazing and truly entertaining. They need to utube it. No one was surprised that Brooke was the evictee, but everyone was surprised at how upset she was. The audience collectively cried with her. Julia, as always, tried to be kind but less successfully this time because Brooke was seriously 😢. Chris was wallpaper in this episode. The end.

I missed the end. I had better go back and watch. But don’t forget, Brooke can act 😁 Just joking. I noticed she was hypersensitive

Torn between Bill, Ridge and the jungle. You’ll always be my Logan. See ya at Il Giardino’s.

The tears when they first announced she got the boot I thought were a bit put on. But when she was talking with Chris and Julia. For as many people who watch bold there are plenty who don’t. If I am honest I doubt I would demonise her (or any of the bold cast) if I walked past them in the street.
She complained a lot about going in last and having to cope while the others already established. She should have agreed to go in from the start.

I have no B&B experience so I was clueless about her. I found her over the top crying a bit off-putting. She was quite whiny about it.
My family said I was a heartless cow, but it was sooo OTT and Julia/lesser extent Chris spent ALL the time comforting her so that I wandered away.
The interesting thing that she said was Natasha for winner! I am team Natasha (although my favourite is probably Yvie and her dancing charades definitely won me over) , but I am enjoying Justine – we finally got the personal chat “I have been single for 2 years. I’m 33 and want a family but don’t want to put myself out there. I would rather spend my Saturdays making a big bowl of pasta, drinking red wine and watching a movie”. Who can’t relate to that???

Go Justine. It’s not likely. Can a lady chef beat a boring footy star? Or a dancing comediene? Or Jethro the goofy narcissist? We need to see more Justine. She lights up when she relaxes and is laughing.

There are people posting here who don’t watch B&B?

What kind of freaks are you?

Sorry Dave. I knew this would cut deep with you!

I don’t know if I like people poking fun at B&B.

I wasn’t that surprised that she went, but was at how upset she got when she had only been there a week.
Poor Richard having to do the challenge by himself. Most of them this year have been done by 2 or 4 people, whereas previous years they have done most of them alone.
That goat with the hoof still attached was revolting. I’ve never had goat. I wonder if it tastes similar to lamb.

Goat is delicious like lamb but less fatty,however it is very bony.

I don’t cook it but those that I know who do, slow cook it. And apparently it’s delicious.
I don’t eat it because we used to have goats, and there was a Greek butcher who took the male babies, preferably younger than 6 weeks. I know, delicious meat but I can’t eat anything that I know by name.

Yes I slow cook it – or used to before that super cute photo.

I saw miniature goats on Landline and they are the cutest.

Have never eaten it myself.

Goat curry is the best!

Plus Natasha has resting solemn face – which I love!

I think this is the first year they haven’t had any nasty people. Previous years there’s been at least 1 or 2 nasty people.

Who’s your favourite from past seasons Carole? The ones that I remember are Casey Donovan, Freddie Flintoff, Fiona Laughlan was a hoot

I don’t know how I feel about Dermott being the evictee. He was kind of laid back fun, with a dash of intellectualism and some odd views. I think there are a number of others that I would have preferred to go before him. I suppose going early gives them a chance to really talk about their charities. I am guessing that the close voting shows that it’s a nice bunch of celebs this year.
Natasha was in the bottom three, so I will have to vote more than once. Officially my fav.

Yes, he kind of got tired of being a dick, stoushing with Shane, and started to relax in the last week, and I started softening toward him. When he started just chatting about subjects other than footy, he was softer and more complex.

Same Bobi. There were some interesting moments in his ‘journey’ and some unexpected highlights, but some of the more expected ones were pretty damned ordinary and the footy team ‘blokes are best’ attitude was definitely extremely ordinary. Overall I didn’t dislike him, but I infinitely prefer Natasha. Her deadpan expression with a straight out eye roll win me over. I find her self-reflection very moving too – obviously a considered thinker.
My husband and I were saying last night that we hope she gets a good gig out of this exposure as we would like to see more of her.
Still loving Yvie though. She is a nice woman with a good sense of humour and I like her a lot. Agree that the casting this year has been well done.

Evie, too. I love her as well. And Justine.
Am I showing my age here when I say I hope they get great jobs, huge salaries, and a decent man.
I know, I know, a man is not a financial plan, and no-one needs a man to complete them, but why can’t men see that these are really lovely women, and I would like them to duplicate themselves. The world needs more decent people like these.

TOTALLY!!! I want everyone else (and yes, I’m looking for some nice blokes who will appreciate them and treat them right) to see how great they all all!!!

Daisy’s recap for last night is up in a new post.