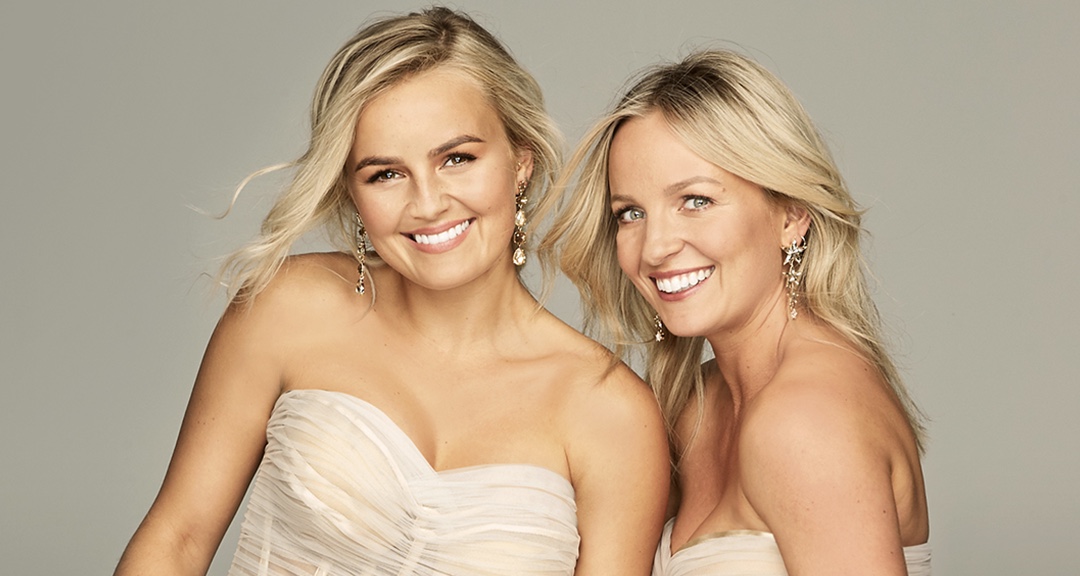 Bachelorette: Sister Act premiers Wednesday on Ten at 7.30. Sisters Becky and Elly (from Matt Agnew’s season) are Looking for love.

Let’s hope they get a better batch of blokes than the macho tools Angie was lumbered with.

I think this is going to turn into a disaster, even more so than usual for a meat-market show. How is it going to work? What if they are both interested in the same man? This twist on the premise will have so many opportunities for things to get nasty or icky, or just sad. Tacky tacky.

” What if they are both interested in the same man?”

A sandwich? Or take turns? How traumatizing for them.

Really it should be evened up with twin males, to take it to the next level. Otherwise, this just seems wrong.

I was thinking about this today. And I would bet money that channel 10 were hoping that the two girls would fall in love with the same guy. Think of the drama. Battle for love! Families torn apart! It’s very soap opera.

I’ve just read James Weir’s recap of the first episode. I won’t spoil anything for those of you who watch, but I have a question. Did a small, furry animal die on Joe’s head?

Is he the bizarre hat guy?
I may be showing my age here but I wonder how some people think that some of these hair styles are a good look.
Or are the normally man-bun people and the glory that is theirs has been let loose for the evening?

No, Joe, a labourer, wore a checked shirt. I only saw the screenshot of him in the article. His hair looks as though someone just plopped a really bad toupee on top of his head.

The girls look lovely – I like Becky’s more (she’s the older one). This season’s twisty rose is called The Country Rose. Maybe the holder gets to go to a B&S ball

Quite a few guys have “Bachelor in Paradise douche” warning signs

I used to be a gym goer. I‘ve seen how much work goes into having one of those bods. None of “those” guys have enough time for a serious girlfriend, or a job, or a life outside of lifting weights.
In fact I’m surprised that they took time out to appear on the show. They must have been promised their own personal gym out the back of the mansion.

These guys are tearing themselves away from the gym for twenty minutes to get some awfully generic, au courant haircuts.

The Cupid guy’s hair was puzzling

I watched the episode last night while I was busy with some chores. There were some highlights.

I liked the guy who brought his brothers in to do a haka. That was cool. Apparently he was Mr Polynesia 2017? That returns some interesting Google Image Search results, let me tell you.

I also loved the guy with the long hair who was doing a David Attenborough impression of the “slightly boozed” (slight?!) men in the mansion.

Most of the guys were handsome but forgettable.

I recalled the dude with the odd hat and strange hair (eek), and it wasn’t a surprise that one of the first blokes eliminated was the guy who makes animal noises (you know, that’s a great skill for children’s birthday parties, but I can’t imagine it would be a high priority in terms of a potential partner looking for a relationship).

Every year, there’s someone who should be on a federal watch-list. The guy who showed up dressed like cupid? Yep. His chest was absurdly over-inflated, so, as Bobi picked, he’s a gym-bunny who would fall in love with a mirror, not another person. I also got a very odd vibe from him, wouldn’t be surprised if he swung both ways.

Anyway, tonight’s the photo-shoot episode where everybody takes their shirts off. Yay. And then we can forget about the whole thing until the finale.

And that last para sums this up.
Mind you, kudos to the guy who rejected the Rose and left. He was interesting and I was looking forward to him. Integrity *sigh*.

I was too. For a franchise that’s often been criticised for being far, far too white, he was one of the few elements of colour there.

At least we still have the star-gazing Afghan refugee. He was handsome and seemed quite interesting.

Well everyone on twitter was saying he was gay. Has he forgotten Apollo? We’ve already had someone dressed as cupid. But Apollo pulled it off better.

Cupid guy/it/whatever should be destroyed! What the hell is that! What kind of brain does it have??

Dancer guy who rejected the rose was smart, realised he was just a token non caucasian who had nothing in common with the ladies. He’s a professional dancer and last thing he needs to do is move off to the country to do some line dancing, great career prospects, not, especially at 25 year of age.

Animal farm was weird and picked he would go, way too creepy, and think of your future MIL if she loves dolphin kisses (WTF).

The girls are nice! Eldest I wouldn’t mess with her as she works I believe for department of defence… but it feels she’s really there to protect her sister and watch over her, not really find someone for herself as all talk seemed to be about the younger one and making sure she found love.

Much as I love to make fun of these people, the girls are growing on me, too.
They seem genuinely nice.
I hope they can wade through the dross and find the good guys. I’m on their side.

I like Shannon. He’s a fun guy, and very good-looking. But I don’t think he’s marriage material. He’d drive me crazy. You guys are watching too, right, can you see what I mean?

The whip-cracking thing was cool. I recently watched this video on YouTube about this champion whip-cracker. He had a whip in either hand, and when he was cracking them around him quickly, it was like machine-gun fire, it was so cool to see (and hear).

So, Harry is just there to land a media gig, right? This is his second reality show. He has a 5yo in SA but is desperate to move to the east coast? And he tells Elly he can’t be bothered going overseas.
Becky is actually far more interesting. I like Pete (the guy who kissed her behind the hat) – and not just because he runs a cafe here in Adelaide

Yeah, Pete seems interesting, actually. I just get a vibe that he’s not really here just to boost his own media career, you know? But I’ve been wrong before.

Do you know Pete is the ex husband of the weather presenter for Ch 10? I think he is there to find love.

Started with 20 men, and I’d dare say 16 of them are just not there for the right reasons. Because jealousy and major crushing just generates sooooo quickly within a day or so of meeting the ladies.

Thank the lord the creepiest of the lot got eliminated.

Don’t know why some of these guys think they need to turn up in their work uniform. Last year it was Jamie in his firefighter gear. This year it was a tradie with his hard hat. I’ve always wondered if someone would ever not accept the rose. Kind of wondered why did he bother? He didn’t really give them much of a chance.

Am I the only one who thinks Frazer looks like young Curtis Stone? He’s a cute but not sure about him yet.. could be another Bella 😊

One looks like Chris Isaak to me. Often they look like someone who’s actually famous and not a heaven forbid “influencer”, generic gym junkie or whateva they are. Blessing or curse, feel for people who look like Donald Trump or George Pell.

Can you imagine a Donald lookalike on bachelor? 😂

He looks exactly (and I mean exactly) like a friend of my brother (only 30 years younger) and who also lives in Queensland.
I have put out a call to see if there is a relationship.
If it is, they are a very nice family.