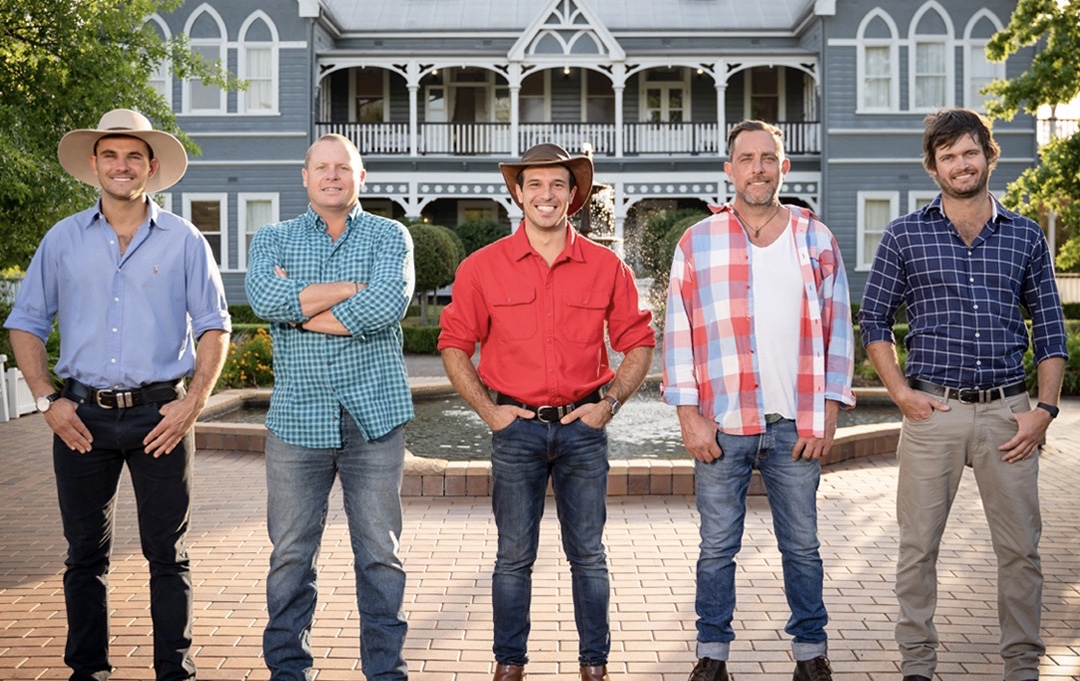 Finale week already? Seven must be happy with the reboot as they are already casting for 2021.
An isolated farm could be a good place to ride out the covidocalypse …

Some farmers pick their girls on Sunday but at least one choice is not revealed until Monday’s reunion.

Tonight the farmers picked their “ladies” and it was very Bachelor: standing under a gazebo, glammed-up gals walking up one at a time to see if they have been deemed acceptable. They did mix it up by not always putting the “loser” first – they cut between each woman – but most of the choices were obvious. The winery guy picked the marriage celebrant, which is handy for the business also. Harry picked the girl who didn’t run away on the second day. Divorced Neal picked the eyelash technician.

Young Alex is supposedly torn between the blonde easygoing girl or the brunette model who freaks out at farm life.
On the final meet-the-fam date the brunette says she is not happy he can’t give her more and she walks away, and then CLIFFHANGER! We have to wait until tomorrow to see if he chases her, ends up the blonde or someone else.
At tomorrow’s reunion we also see our poor Italian farmer Sam with a smile on his face, so hopefully he has found a lovely girl who suits him.

This episode would have been better as just a meet-the-family one, shown earlier to replace one of the pointless get-togethers. I found that part interesting.

I haven’t been a fan of Justine (Neil) but I admired her for stating clearly that she wouldn’t be moving to the farm, disrupting her two young kids, until things were much more serious. Neil seemed a little surprised, but surely that would have already occurred to him. I suppose we will find out tonight it they are able to manage the distance. I was sorry for Karissa but I think that she is better off because Neil has so much baggage, Justine will have to work very hard there.

How come half the girls had “friends” instead of family to meet? Are they still in high school, where the opinion of friends is paramount and you haven’t yet realised that friends are transient and family is for life?

So glad that Harry didn’t listen to his sisters’ ravings about Madison. She might be lovely, but family can’t always pick the romantic spark, and he was always leaning more to Stacey. Stacey may have been my favourite of all the girls.

I think Nick dodged a bullet with Naomi. He had already said that he was a bit scared of her, which first time around just sounded incidental. But meeting her with her friends was seriously scary, and he was right to run a mile. The friend who grilled him separately was terrible, and she shut the gate on any chance Naomi had. So Nick was left with just Liz (marriage celebrant). I am not feeling that this one will last any length of time – somehow the magic is missing, and she seems to still be under the impression that Nick wants kids.

The “reveals” themselves, as Juz described, were awful. I don’t watch Bach so the format was so ridiculous, the farmers were obviously given a script (“Right from the start, I thought we had a connection…”). Dressing both girls up to make them wade through long grass and stand awkwardly facing each other while the speech was made, just felt really bogan. It made me realise how much I used to love the way the farmers travelled to their chosen girl’s home, and the viewer didn’t know whose house it was until she opened the door. Much better suspense and more natural dialogue.

It was also so obvious that the guys had chosen well beforehand but had to constantly reiterate that “I have such a hard decision” “I don’t know how I am going to choose”. Two of them said after they had revealed their decision that they were so relieved to be able to court the girls openly at last. In other seasons they have been allowed to show open preference if the attraction was blatant, not keep pretending to be on tenterhooks (and encouraged to keep kissing the other girl, or draping their arm around them).

The three final choices were no surprise, and there is no way Alex is going to choose Henrietta (dark beautiful teacher, farm-phobic) even if her walk-out was not final. He is far better suited to Jess, and out of all the relationships this is the one that might go the distance.

The ratings have been continuously good so they must have gained many who like the artifice of the other shows, without losing too many traditionalists. It has been renewed, but I wonder how many of the latter will go around again?

Looking forward to seeing Sam, and hearing which girl he has kept up with since leaving. Logic says it would be Ashleigh, but one of the others (Sophie? Emily?) may have reconsidered their decisions to leave.

A few surprises and not surprises at the reunion tonight. Liz says Winery farmer Nick practically ghosted her. Italian farmer Sam has met someone and looks super happy. Alex and Jess dates but he friendzoned her and he is now dating his No. 2 lady (the one who is scared of cows). Harry and Stacey – who seemed perfect – broke up and you can tell she is devastated but keeping a brave face. Farmer Neal and Justine have been Zooming a lot apart from when he was ina car accident and she flew down to look after him

This episode was the best with regards to staying true to the real format. All the farmers met back at the Hunter, had a discussion with Natalie, and revealed (or not) the girl he had brought. It was the usual quality episode, mainly because Natalie is such a perfect host. The only change was having the farmers (and plus ones) in the room for each discussion, which was the only innovation all series that I liked.

Juz has summarised the results for each farmer. A few surprises there, with Harry and Stacey not lasting even a month. The grab made it look to me like Harry decided the show was over, so he could stop trying and go back to normal. Stacey moving so soon to the farm was a mistake (a mistake for all of them), they needed more time to explore the relationship before having a girl move a long way from her old life with no connections/job etc in the new place.

The Alex surprise was heavily flagged beforehand, but I think most viewers were chanting “don’t do it, don’t do it” right up until the moment he lost everyone’s respect and brought Henrietta in. Not much else to say except that forever to come, some men will be led by other body parts than their brains or hearts. When Jess sees the show, she might be consoled by seeing how physical he was with the other girls, and therefore more shallow than she thought.

Lovely to see Sam so happy, and the first impression of his Kirsten was good. Hopefully they will do better without the artifice of the show.

Nick was never going to last, and I am glad Liz realised so soon.

Biggest surprise of the night was the fact that Neal and Justine seem to be making a go of it. Probably helped by respecting their family responsibilities and therefore slowing it all down. A major car accident will do that too, and I feel sorry for Neal with his obviously substantial injuries. Justine’s body language was a bit stiff, but that was hard to interpret as negative or positive. Her little girl was so cute on zoom. I don’t know how they will be going now, with no visits at all. I suspect that as soon as one of them spies a new option, the relationship will wither.

So, the only possible success is the farmer who lost all of his girls early.

Mmmm…in addition to the failed changes to the format, I suspect that modern attitudes to marriage have made real success here almost impossible. It might need to be renamed Farmer wants a Short-term Defacto (for a bit of fun). Previously, it was accepted that “..wants a wife” really meant that the relationship moved in the usual way toward a proposal. This year, I read so many comments that expected the girls to up and move to the farms immediately, as if the marriage part was irrelevant and all that was important was hooking up. Not a good basis to start from.

Back next year? Probably not.