I did not need to see that opening sequence – the back and front blurs were not sufficient.

That was a definite fail … or was it?

I can’t speak for anybody else.

But I’m not complaining.

What? I’ve had a crappy day.

I loved Henry beating David in the reward challenge. While his was bouncing in the air, he just reaches over and takes David’s idol to the ground, a split-second before his hits. That was some beautiful quick-thinking strategy.

Of all the challenges to use their ticket for, I feel like, ice-cream with sprinkles? Yep, Locky and Phoebe made a good call.

I was okay with the nudie run, but I don’t think I needed to see John licking chocolate sauce off Henry’s chest. Too far, guys. Too far.

Jonathon? We’ve talked about this.

This has been a very sexual episode.

Well a couple of nights ago it was, “Lockie’s sack is getting heavy”. Or, “Can Locky hold up that heavy nutsack?”

Next they will have to get a rod in a hole, or find a bird in the bush.

I don’t think Jonathon actually knows what that means.

I noticed that, actually, when I was listening tonight. I was like, oh c’mon, there’s no way he’s doing that accidentally.

A couple of cones would ramp up the paranoia in the tribes. Good for tv. JLap is getting these double entendres written for him. Surely. The balls are in his court to stop it…….or he could face the sack.

Jono has ramped up his Twitter action this season 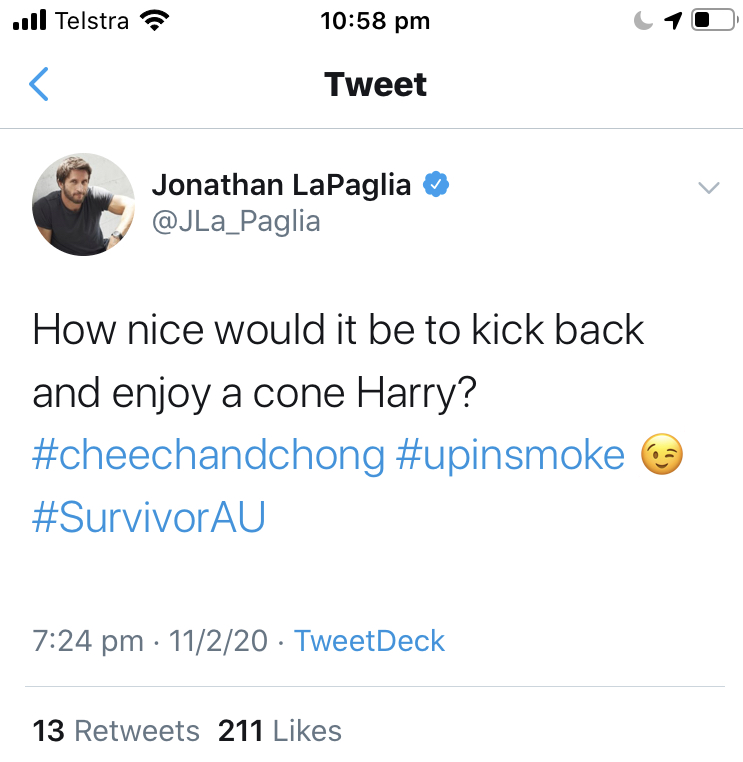 When did fake idols become their own meme? Now Henry has one (and he had to destroy his own pair of jeans to make it). Is there anyone who doesn’t have one? And I’m starting to feelfor the production crew, because they’re the ones who need to keep a whiteboard list of people with real idols, and people with fake ones.

So, the dullest tribe member evaaaa, who didn’t look for an idol clue that she was sitting on, suddenly becomes bright enough to check a log for a clue.

Is Shonee the first person to wear a velour lace-up onesie on Survivor?
Urgh, sporty alliance was irritating last season and it’s irritating this time. How can you trust Henry after he slipped an idol to the other side?

So, Henry gets out-idolled by Shonee. I actually loved Shonee playing the idol, because it called Henry’s bluff. She produced an actual idol, and — as she and Nick both immediately suspected — if Henry’s idol was fake, he couldn’t have used it.

I tend to agree with the AFL player, it’s too early in the game to be taking out the physical challenge beasts (particularly since Zach is so annoying that he won’t last much longer either). It was the right move to make, it was just *completely* the wrong time to make it. They could’ve still used him, and frankly, Sharn is higher on the dead-weight list.

They have to be mindful of how very good Shonee is at the social part and Sharne is pretty good too. What’s more dangerous? I would say the bigger threat.

Sharn is extremely dangerous. she got to the END and lost by a vote!

Thank god for that – it was too stressful seeing the Lil Rascals in jeopardy. If Henry had been less flashy from the start he would still be there now. The food rewards this far have been rubbish: coffee, fish n chips without fish and ice cream. Where’s the protein?

I enjoyed Henry’s big flashy game, but it’s TOTALLY on him that he got voted out. We have been predicting this since forever so it wasn’t a surprise.

They need to do a tribe swap soon.

Shonee did well to have an idol, because her “friends” dropped her right in it.

Abby’s wearing thin on me. Nick also. Amen to a tribe swap.

Tenplay has the extended footage of the voting, and Abbs and Sharn also voted Hen. And Lee voted Shonee but said he only did so because he was spooked by Henry’s planted “idol”. I see Lydia is still playing the same old game “sigh”. They should have just done a Brains v Brawn v Beauty season for her play to make more sense

Shonee can smile smugly but the idol has been played and her name is obviously next on the list.
So, Shonee – meet Inevitable.
And I am hoping that, by sending Henry home, they now get disseminated. This lot are all brawn and no brain, and I am bored by their arrogance.

I’ve gotta say Harry, Nick and Shonee are putting their names out there a lot more often than is safe. Shonee, in particular, should be counting up the number of times the weakest link has survived one tribal by playing an idol and gone home at the next.

It’s fascinating the other players still see Nick as snarky but Harry seems to get away with it. He is smart letting Nick do the talking (unless it’s just the edit)

Agree Juz, the edit is certainly putting the target on Nick, not Harry. And I noticed Abbey joking around with harry about his stick of confidence, so it may be that Harry is forming superior connections?

Anyone on Twitter should check out Vanessa Sunshine (the smart, deadpan girl from Bachie). She is obviously a Survivor fan

Just watching now. I still like Henry. I like the cheekiness. And I had to play that balancing challenge between Henry and Davey twice. Great strategy when you’ve lost balance. Throw high and smash your opponent. I think I have seen that before.

Hen does seem to have unnaturally long arns

But are they wet, slippery and hard to grab? Just asking…

I volunteer to find out.

Oh, I know, it’s a dirty job, but I promise a very thorough, luxurious examination.

Did the producers say: Now, take off your shirt and put your jeans on, then go stand wistfully by the water next to this strategically placed machete stuck in a tree?

If Henrry finds an idol, it’s probably because the producers want him in.

Oh damn. Stupid. They are letting Shonee and Nick control the game. Shonee is dangerous.

Well my favourite has gone. Yes, Bobi, Shonee was a bit smug last night. But Matt still has smugness sen up with hiz Godfather crown.
I don’t have a favourite now that Henry has gone. I was hoping they would quickly make up an Eviction Island.

Yeah, it was a shame to lose Henry, but I think my favourite player is still Dirty Harry, so I’m hoping he sticks around for a while yet (of course, if the dirty rascals alliance falls, then he and Nick are in trouble).

Tarzan was great pushing the crate. Mmm. Maybe I will cheer for Tarzan now. There are probably others I would like if they get the airtime now.