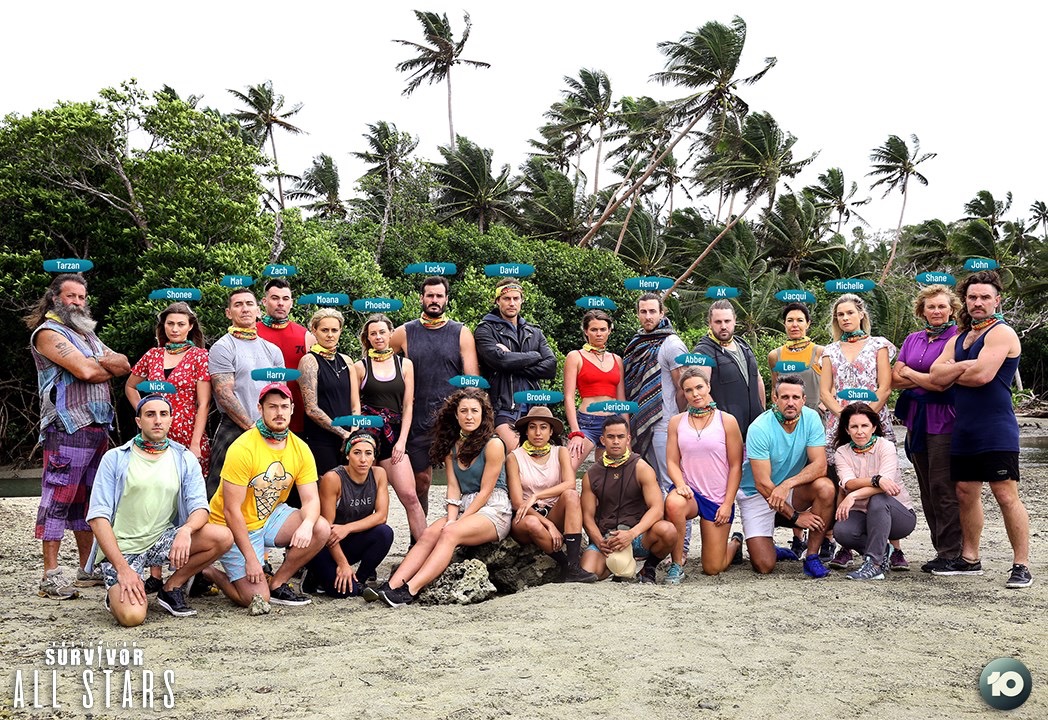 Henry is playing the same game as last time: too flashy for the sake of it. Nick is trying very hard to keep his fanboy enthusiasm on the downlow. Moana is getting the dreaded Purple Edit when she has such a good back story.
Are you enjoying the show so far?
Which team will win the Sword of Gryffindor tonight?

Where’s Janet the Firestarter when you need her? Well done, David and Locky, for their Aus Survivor first in starting a fire without flint.
And thank you, AK, for being such a good narrator for the yellow tribe. And for your confessional describing your role in the “young, attractive crew”.
Kudos to Daisy for her challenge performance.

That was hilarious AK self-describing as the Young Attractive Crew!
I am never ever giving Daisy kudos. . . well a teeny bit. But I am super worried that she will be around for a LONG TIME.
Mind you, I am definitely over Lydia being hyped as the Biggest Challenge Beast ever.
I was not happy with JLAP calling Moana a handbrake either.

What an effort from Phoebe – love it. And nice comic relief from Nick. And from Michelle and Shonee struggling to get on the platform (it was crazy high).
David and Henry’s wrestle chat was funny but dangerous. And a nice strip from Locky to evade Lee

Yellow wins reward and Phoebe and Locky get to go to the Survivor shop to get supplies and Jericho rightly points out there will be a moral dilemma test there. Good move for him to get the winner target off his back. I see why Phoebe wants to try gain an advantage but separating yourself from the tribe is always dangerous. At the shop the options are mainly small amounts of food – they can pick five. They pick flint, tarp, a ticket for two to the other tribe’s reward win, cookies and some spuds. And eat some cookies. I hope Jeri the Cookie Monster gets one.
On the way home they hide the cookies.

Oh no – the new Cookie Alliance is Phoebe, Locky, Daisy, AK, Brooke, Flick and David. Does not bode well for Jacque, Tarzan, Mat, Purple Mo and Jeri. If Dave does not have a secret alliance with Jeri I will be so disappointed.

This absolutely is David’s episode, tonight. He started a fire without flint. I can’t imagine how difficult, that would be, and I’m sure it’s not a common event, even through all the past international seasons. My respect for his gameplay just went on two or three notches, like, wow.

And he’s so attractive that even Locky was into him. Hell, during the reward challenge, David was riding Henry like a cowboy for a while. Good lord, we’re only 2 episodes in and the man’s turned two blokes. I approve of this :).

That wrestling challenge, though? Like, it was nice to see everybody throwing down, but, like, whoa. That was definitely something to watch. I loved that Lee wasn’t going into the water because he had hold of Locky’s shorts, so Locky just decided to chuck his shorts. Hey. You do whatever you have to, to win.

What I always find funny is that, the castaways have to swim between the platforms, but JLap always moves between them and he’s perfectly dry. It just makes me laugh that they bring in a boat (probably one of the boats belonging to the camera-crew) specifically for him.

Locky and Phoebe are going to the Survivor shop (Phoebe really deserves it, after Abbey sat on her face for half an hour)? Ten bucks says there’s an idol in there somewhere.

people are getting pretty banged up in these challenges. And omg – we see Tarzan searching for an idol under the sit-out bench. Proper gameplay from Tarzan!

Welcome to the dark side, Windsong.

“Moana is a handbrake in this challenge.” Harsh!
Green (Nick’s team) wins the challenge so Yellow (AK’s team) goes to tribal. Hooray for a season that’s not a Pagonging of one tribe – that’s Survivor lingo for one tribe decimating the other.

Ok so no secret Jeri-Dave alliance then. Damn.

Mat and David need a secret pact in a hurry or it will be David v Shaun all over again.

Aargh, poor Jeri. But he showed at tribal why he is so dangerous. It’s annoying as a viewer but I get why past winners are an easy vote first up. The “as long as it’s not me” Sandra philosophy plays a part, and Jeri is a great player.

Damn it. They had the perfect chance to get rid of … her … and they didn’t!

I’ve gotta say, though, that I was really impressed by David’s game-play tonight. He knew that going after Moana or Mat directly would be obvious, so he went after Jericho, and that seemed to really rattle Mat’s alliance — David was right. They hadn’t expected it. I laughed when Jericho started crying during the tribal council, because I was thinking, surely he’s putting it on … and he confirmed it when he voted. But David knew he was faking that.

And yeah, Jericho’s a sweet, smart little dude, who managed to win once already. I can’t fault them for not risking him sticking around. It is interesting that, the first two evictions in the all-stars season were the two past winners. I bet Pia and Kristy are glad they didn’t come back.

I see this tribe, going forward, becoming a battleground, as Mat and David fight for control.

Damn it guys. You really should’ve taken out Daisy.

If Kristie played again I reckon she could go far because she is underestimated. Shane is also underestimated but she is also a more recent winner and older and slower in land challengers. Pia would be first boot

I don’t know. Shane was a sweet old grandmother (being underestimated was the reason she’s half a million dollars richer), and they knifed her, the very first chance they got.

I still want Survivor: Crafty Old Ladies with people like Shane and Kass

I KNOW. I was edge of seat that she might be gone.
And now we are going to have Paranoid Daisy, which is just not fun!
Henry is playing too dumb – again – and will probably throw the challenge so he can make a Big Move with his idol. Sigh.

I know. He’s obviously clever, but he’s just trying a bit too hard to prove it. I want to tell Henry, “It’s a marathon, not a sprint, buddy”. Harry and Nick understand that, but I’m not sure Henry does.

And for whatever it’s worth, if Daisy goes rogue … David has a 7/4 numbers advantage on his tribe. Cutting Daisy loose might not be a difficult thing for them to do.

Um, why is Moana there again? Didnt she quit last time?
It appears from tonights episode that she really doesnt want to be there again!

I can vaguely recall Moana being a challenge badass, on her first appearance, so it is kind of weird that she’s gotten no screen-time at all, so far, and she seems barely interested in being there.

But I thought she left because of an injury.

She was a super good challenger and then she got sick and lost the will. She seems to have started where she finished last time with no will, so I’m not sure what is going on there.

I feared for Phoebe and AK when they started making free vote noises. That often ends in tears. At first I thought it must be the Cookie Alliance blowing smoke, but David looked very, very unhappy as did other alliance members.

I was really disappointed to see both Shane & Jericho go first. And he wasn’t part of the cookie alliance this time. He was on the outer. Man that wrestling challenge looked pretty violent.

Let me know when Shane (can’t say why she bugs me), Flick and Lee are gone and I will watch. I hope next Survivor is unknowns.
Was Moana blonde?

Shane the swimmer? She was the first person sent home.