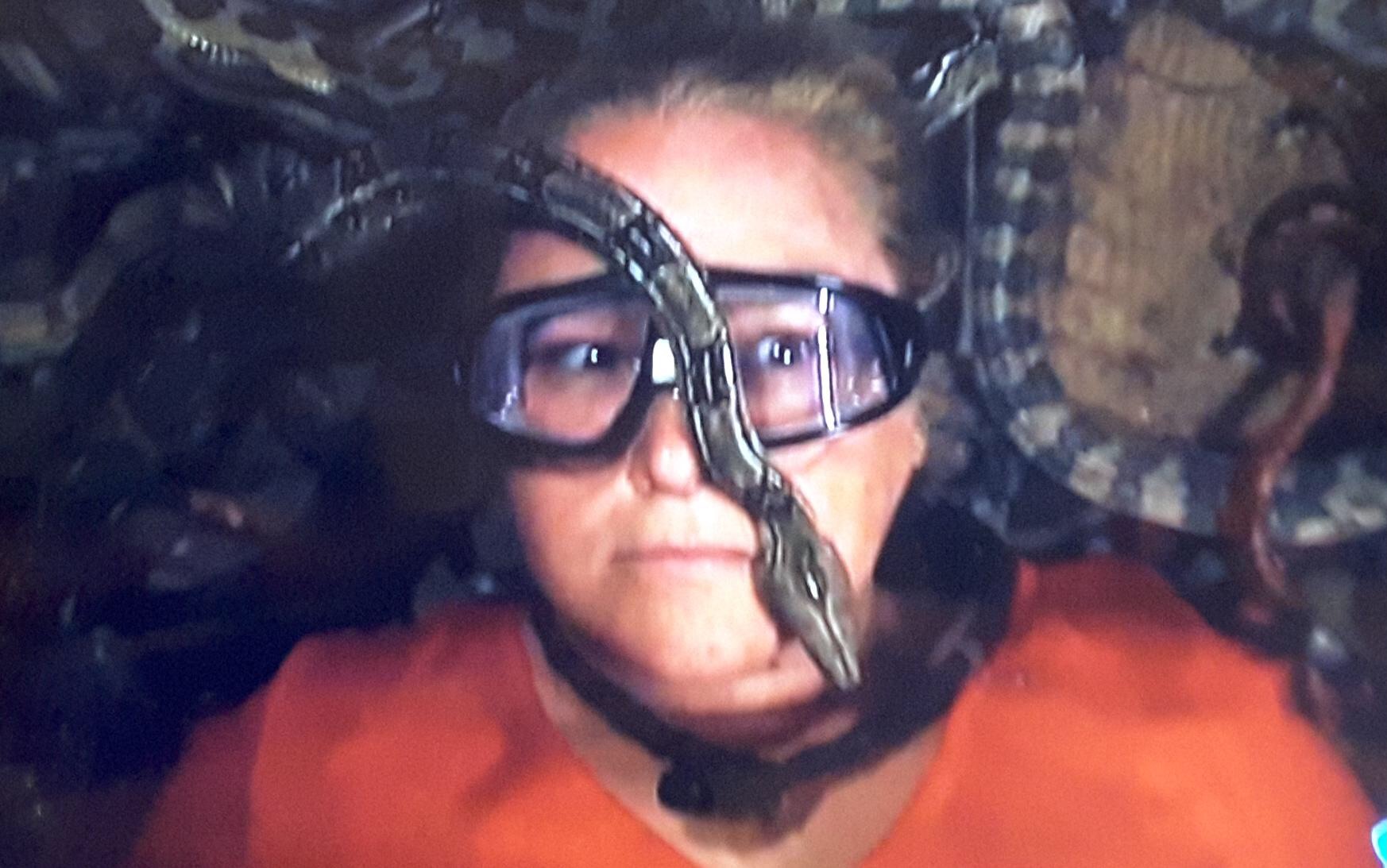 Thanks to guest recapper Daisy:
Tonight, two of my favourites; Yvie and Luke, braved the Viper Room. If they watch that on replay when they get home they will ask themselves, “Did I really do that?”. Poor Yvie was in the underground tomb, filled with snakes, for 16 and 1/2 minutes. She is the new world record holder for Viper Room time.

Justin asked, “Mirror, mirror on the wall, who is the fairest of us all?”, then told the mirror that it was just a rhetorical question. Julia and Chris excelled in stupidity. Luke entertained Mr Entertainment, Richard, with an account of the time he was hit on by Lindsay Lohan. I think Luke can do better.
KKL took one look at her dinner, and rang Il Giordino’s for take away. We found out tonight that she enters Iron Man comps, that she comes from a famous movie making family, and that her first movie was with Patrick Swayze. Thanks to Natasha’s probing questions, we also found out that she thought the “Me Too” movement had to happen, but that some women went overboard. Brooke just wants everything to be fair. It was a good interview. Natasha wants to be Brooke’s friend.
Tomorrow night we have another horrible eating trial, and since Katherine couldn’t even get through a reward dinner, she was hoping it wasn’t her. To her relief it will be Shane and Justin.
Oh, and Richard wants KKL’s cosmetic surgeon. Don’t we all.

Just relocating the Julia/Chris conversation. They are killing the show. I would much rather hear the conversations in the camp. Surely, with that many people in camp, producers can get some conversation. I would rather hear people in the camp talking about their washing that Julia and Chris’s nonsense.
It is interesting to see that Julia has modified her routine. She stopped the kangaroo hop thing she used to do. She stopped the tiger claw movement. She stopped hitting on, and drooling over Chris and other men (maybe the me too movement does go both ways, as Brooke seemed to imply). Now she is cradling a large rat. Now THAT’S hilarious Docteeuuurrr. Back to le zjjjongle.

Does anyone know how old (young) this lady is?

I googled. She is 57. About the right age to date Dave. But she does expect coffee in bed and dinner at Il Giordino’s.

Apart from loving Evie, this was another ho-hum episode.
And the conversation with Justin about his grandmother asking his mother if he was gay, and how offended he became, was odd. It was almost like Richard’s rational point of view got Justin’s brain cells to whirl and that sent him into a panic. Peculiar.

And I know it’s easy to sit back and laugh at Justin but wouldn’t it be nice to have that much confidence. Really.

Yes, and yes. Justin was coming dangerously close to suggesting being gay was an insult. Perhaps he realized it and decided it was best to stop the conversation. Richard showed a kind hearted side, thinking if the poor grandma.

I don’t mind confidence. In fact I like it. I find it better than the opposite. As long as the confident person isn’t a narcissist. A confident person can think of others. A narsissist is a whole other story. Self depreciation is hard to work with.

I reckon that Justin was rambling on to Brooke in the hope that she would use her “pulling power” to get him a job in LA. He could easily pass for another of Bill’s love children, and be a boyfriend for Stephie. No wait….we don’t even know if he can act………..😂😂😂😂😂😂😂😂😂.

I’m not feeling crash hot atm (it was waking up from an arvo nap that did it) so I can’t watch the tucker trial. Shut up Chris. I can’t even listen.

Speaking of Chris, I enjoyed the bit in the sadistic bathtub challenge when he told Natasha it would be better for her to open her eyes. And she asked: “Are you saying that as my friend or are you being a pr – -ck?”

Dipped in for short periods tonight and ended up with Dermott’s story from a Bali bombing.

I was surprised that some of them sat there apparently not knowing how the story was likely to end and wondering why they forgot.

It was powerful, Von, but oh so awkward panning to Julia and Chris after a very serious and sad topic.

Article on Dermott and Bali bombing. Oh my. https://www.smh.com.au/entertainment/tv-and-radio/we-hear-this-kaboom-dermott-brereton-opens-up-about-bali-bombings-loss-20190130-p50ul2.html

And Angie continues her trek to the top
of my Shit List: her preoccupation with race (referencing Justin as white male) shows her shallow intellect and the problem with consuming American woke narratives pips and all – it introduces race politics in superficial yet bigoted way. I hate that people like her have a national platform.

Yes, Bolders. It got my hackles a bit last time the referred to Justin as “white privelege”. Like she’s not. So glib.

Daisy, you complete me.

I’m not offended. It’s shorthand, like a lot of cliches. That’s what cliches are for – to paint a picture quickly and effectively.
As an example, mansplaining,

I am. People who use that racist term need to study the history of many of the Irish, and even the impoverished English. Power and money bring privelege, not the colour of your skin. It’s too simplistic and it’s insulting.

Also a priveleged person using that term is like saying, “Now I am excused”.

It’s just as easy to say He’s arrogant or confident and be specific – she didn’t have to go with the he’s arrogant because he’s white. Angie’s a light intellect -is it valid to say that she assumes that her opinion matters because she’s white?

I got accused of white privelege by Korean friend. I asked her was I priveleged when my dad died when I was 4 and my mother and step father were abusing my siblings and me? And that she with all her ballet and violin lessons actually more priveleged than I.

I’m not even that white.

BTW, she was such a leech, borrowing and leeching off my “white privelege. She didn’t mind asking to stay and leech off me. But that ship sailed.

You see, I don’t think Justin is stupid. I think that’s too simple an explanation of what’s going on in his head. Nor do I think that he’s arrogant,.
I am guessing he left school as soon as possible, he is an industry that requires very little brain activity, and relies heavily on smiling at the right time, (and a bit of etcetera inserted in here. You know the drill). But most importantly, in terms of life goals, his work mates (male and female, black or white, Asian/European/Slovakian) would be just like him.
I think his little grey cells are being challenged and they are running to a place of safety – and he is fit, and he is good at the food challenges, and he is photogenic- to keep reminding himself that this is where his value lies.
It would be much easier for the audience if Justin was a p**k but he’s not.
We are all watching the struggle with affection. It’s hard to find two words to sum that up.

On a less serious note, Katherine got one of the easier trials, in terms of endurance.

It was interesting watching Angie and Evie poking fun at Justin’s lack of knowledge and correcting him that Chinese people “either spoke Mandarin or Cantonese”. Maybe they oughtn’t have been so smug and condescending as there are many languages spoken throughout China. Many.

I am going off Angie big time.
Sigh.
I hate to sound like a right-wing shock jock, but I did get a big dose of “politically correct” from her. . .
And laughing at Justin is not good. Aside from the shooting fish in a barrel aspect, frankly he is a gift to us all and I don’t want his confidence, however misplaced, to take a hit!!

I thought Angie and Richard having a private nick-name, Alisha, for Justin was nasty. I get it that we tease and joke about camp mates and people on tv, but when your in the camp together….well it smacks of a sense of superiority from her, and not very nice from Richard either, as Justin thinks Richard is one of his best friends in there. I know Justin is incredibly outspoken about his view of himself. Many people are just as vain, but know not to say what they think of themselves. It may not be that Justin is even more vain than Angie.

Justin really annoyed me last night complaining about how few stars they got & that he could do better. He wasn’t there so how would he know? I’m hopeless at remembering things. They do similar challenges on Survivor.
And they are still doing that stupid big ball challenge that knocked Jacquie Lambit out.

Justin just doesn’t have a sieve. I think he is very immature, but fun to watch.

Just secretly (get in close so I can whisper like Richard and Angie- incrowd only 😉) Brooke is a bit shrill and seems odd.

I am so sad about Brooke (I wasn’t going to mention it). I thought she would be much more thoughtful and a bit more fun. She is either trying too hard, or she is a bit tightly wound. Hopefully it’s just a coffee headache but I suspect we won’t find out because she won’t stay long.

I think it’s her I grained politeness. Maybe it would take a bit more jungle to get her to let loose. I mean, we haven’t even had those farts she promised us. She kind of seems a bit eccentric though. I am saying that because she is starting to remind me of a friend who needs tablets for her crazy. Maybe a few more days and we might see her drop her polite girliness. I am starting to detect there is a crazy cat lady in there.

Brooke is no Marcia.

I have noticed some mutterings about the boys club atmosphere. So it’s not just my imagination.
It’s difficult to know sometimes whether it’s just editing or the real thing.

The girls said something like “Wow suddenly the dynamic as changed to boys’ club”, when Shane first walked in. The tea towel flicking on naked bums began immediately. Funny that Justin didn’t fit with all the boys nudie runs.
I noticed last night that he does have a strong feminine quality, but I like that in a man. I can talk better with a man that isn’t all Ape, cars and footy.

Do you think that perhaps Kathryn has a luxurious little tent behind the scenes? I havent watched any of her performance yet.