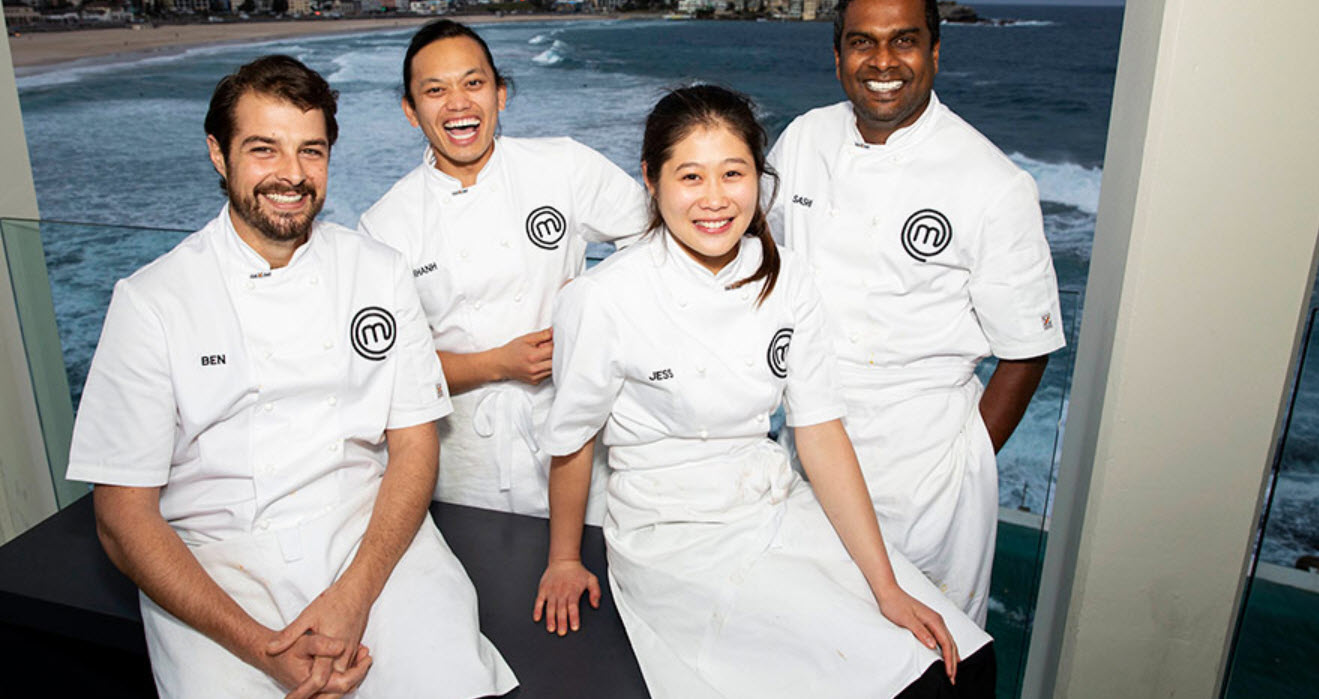 The elimination challenge will determine who will go into the semifinal. The bottom three contestants will fight it out for their place in the competition. Plus, a final MasterClass of the season.

Masterclass on a Sunday? That’s two hours of MC tonight.

Who do you think will take out the title of MasterChef for 2018?#MasterChefAU Grand Final Week starts 7.30 Sunday on TEN. pic.twitter.com/8mbwyVsgKk

Over to Amanda for her recap (thanks!):

Hope 19 is ‘freakin out’ for the last time.
But I think Sashi will go.

19 has matured in the way she cooks. I don’t think she understands what Mollycoddle is.

Mollycoddled is what the judges have done to her , as opposed to the cruelty shown to brutalized Ben and the shattered and shat on Saschi.

An other bisque from Ben. They just cook the same old thing

Gary. You have cooked a few bisque’s before. Back to passively aggressive comments to Ben.. So astute why didn’t he say to Khanh and Reeth another granita, ice cream, mousse.

Gary’s eaten more bisques than he’s cooked. Anyone can “sea” that.

Haha I sea what you did there.

They knew 19 would falter if she had to Cook for 30 people and something not dessert. So 4 people to Cook for and Jess is preparing dessert. Oh the shock. What a load of Hooey

I am out. The wobbling camera work is making me seasick.

But we saw enough. Jess thinks she should win this as she did crap at school and really has no idea what a huge, huge ship is. Oh what a surprise? What is the challenge? Cook what you want.

My grandpa was a Navy man. Mad sure we knew the difference between a boat and a ship.

I did laugh when Jess said ship and then said boat

A load of ship.

You can’t go. We need your Snark!

Oh no. Not Hainanese Chicken Rice from Sashi. Poh lost the finale because of Chicken Rice

Be prepared I am doing a recap for this 🙂

Looking forward to it, Amanda.

If not for this blog, the finale will be so boring

Another ice cream from Jess

Mollycoddled 19. Not much creativity, because really when has she had to push herself.

Did anyone else see when Jess gave her insincere “good luck sashi” he just stared her down. Suddenly I like him 🙂

I will have to rewatch to see that

He has been in law enforcement for a while. Only a prison guard for a few years. I believe copper before that. This guy is no dummy. Probably has picked up on a lot of subtle cues. His BS meter is in overdrive.

I have decided either Sashi or Ben going by just reading the comments here. So I think I will just spend the rest of the night building a Jurassic World on a new computer game.

No House Rules tonight, so it is what it is.

No. I am hoping 19’s nervousness gives way to sea sickness and then falls over board while chundering. Or does Khanh push her. Therefore it become a Mystery Chef who done it.

The chunder down under

19 is nervous. Really I now have to take adrink as per drinking game. Glad Khanh is not cooking and they stopped mentioning 19 age. I would be super pissed and have a boat load of saltiness. MC booze ceuise

Hopefully the guests will be involved in the judging to make it a bit fairer.

khanh must be feeling jittery from no camera time as yet

Can swan around and tell everyone how fabulous everything tastes.Maybe he got pushed overboard. Lol

Garry “ the pressure really got to you today”, and two obnoxious judges trying to derail him. I think the look on bens face spoke a thousand words

I saw that too. I feel him and Sashi have picked up on the Shenanigans.

I am hoping there is a bucket load of clean spoons. Master swap of germs.

Not much on the lady guest chef. Not sure why she is there

The ‘ship’ is so small. With the camera crew around, not much space for everyone.

Again, I think they knew beforehand what they are cooking. Not easy to stock up the equipments and produce for cooking in a small ‘ship’

Gary: he is bribing us with crispy chicken skin. So what are other people bribing you with? And Sashi doesn’t do well. Sad face.

Sashi may be going home unless Jess really stuff it out

Not impressed with Sashi’s dish. Hardly seems worthy of the finals

Where is the ginger sauce and spring onion sauce, Sashi?

I must have ginger sauce with my chicken rice

FFS 19 doesn’t know the difference between Jupiter and Saturn.

Maybe when cooking the rice, throw in some brown meat or bones?

Not sure Jock know how to cook the authentic hainanese chicken rice. Maybe he is thinking of Clay pot chicken rice.

Oh, the tuile make it appearance!!!

Can’t miss telling the world Jess is only 19!!!

19: Someone push me overboard. Sashi and Ben rush to her aid as Khanh rises from the Briony depths to help. Dammit according to drinking game age was mentioned. Drink Drank Drunk

Oh no – the judges don’t like her dish – better mention her age!!!

Haven’t watched yet so avoiding reading your comments, however, heads up, Survivor fans the first 15 mins of the premiere are on TENplay now if you want a sneak peak. They usually do not keep it up for long.

Good. I am rather surprised at how quickly Gary came out with the result. I almost missed it

Well, that was a surprise elimination

They knew we were onto the fix lol

Ben sweet! Oh damn Sashi hugging 19 he gave a serious greasy to the judges. The hug looked stilted Ben looked pleased.. no more drinking game duh Reynold is mentioned as well as she will become a star. you started here as a little girl and leave as a lady.. ugh Hairy George. Gross wait 19 was mentioned twice. Let me pause for wine.

Only 19 also did work experience in The Press Club, George restaurant

Work experience in the kitchen? Or….

George does press ups on her at the Press Club….

Well she came to MC as a little girl and left as a lady. Seriously. Wtf. So alleged press ups, comments here are for entertainment purposes only.lol

I hate this judges cooking contrived nonsense. Good to see some of the other contestants. Didn’t notice Reece, and only one shot of Chloe.

I would break out my saltiest Gordon Ramsay impersonation. The Gigigitygigs Seem to be giving Ben some passive aggressive lip.

Still no Chloe cam. Maybe she blasted the producers for not getting heir in the coveted top3. My guess is. Allegedly. Comments here are for entertainment purposes only. And because MC drinking game . The alcohol made me do it.

George is such a nerd in his glasses. I saw him wearing them on hybpa he kept taking them off in between reading every question

I wait I misread this I assumed Gary. George wears glasses?

Gary too. George takes his on and off.

Gary loves his dish. Him and Khanh should have a love fest. Wait wot.

Oh hey this is going to continue. Dear god the MC drinking game will have me paralytic. Glad I have no work tomorrow.

The “moments” between 19;and George are so scripted. Remember that this is the 1st time American MC has crept into our Oz version. Ramsay. Is the executive producer and star of that. Hence I believe is why he finally made an appearance. This is why they changed the audition format with the families in the pallet and fruit box garden. And the Fakery is just transparent.

I watched the Full Monty prostate awareness show on “other channel”. Forgot this was on.

Tuned in to see Jess has gone.
Party at my place.

So did they really full Monty?

They really did do the full Monty. Pixelated of course. How nervous would you have to be?
It was very funny in parts, and poignant in others. Worth watching.
And I suspect much more fun than this episode of MC.

So, Facebook comments are exploding I assume? Like: They kicked out the only female and have a male final only. So sexist!

Well, bye-bye baby girl! But I still do not watch more MC, it is enough to read your comments on here. 😀

He kind of reminded me of a dog, humping bens leg

Surprise elimination…thought Sashi would be gone until I heard the judges’ comments about his and Jess’ dishes although they made it sound close but the ingredients in her dish didn’t mesh well.

Aldo overload…could have done without that.

I’m guessing Ben vs Khanh in the finals.

Overall boring cooking, btw…
Ben…more seafood and another bisque.
Sashi…some chicken and rice.
Jess…yet another ice cream with some fruit and other garnishes.
This is the year of repetition and there has been too much of it. Even Gary made ice cream to go with his Brittany biscuit.

At least it wasn’t a Tuile! It was a Brittany biscuit. Expect to see that next season.

LOL….or perhaps someone will recreate a Brittany biscuit for a final dish.
I expect to see a few more ice creams before the end of this season.

Totally agree Smythe. Uninspiring dishes from all three. Seems Ben can only cook fish. I don’t really like any of them to win, they are certainly not, in my opinion, the best of the 24.

Indeed Smythe. Super boring. And again they get to cook whatever they can- oops- I mean LIKE.

I am actually kind of outraged by how much they are dumbing down this season. The challenges are so blatantly rigged, the contestants can cook whatever they like, there are no restrictions on produce or ingredients, mystery boxes aren’t – they are startlingly obvious, judges are phoning it in, etc etc.

I am with you Brussellsprout. The caliber of the contestsnts is not up to scratch.

I really don’t care who win.

I can’t vote. I don’t like any of them and I want them all gone.
Ben or Sashi to win? I think Kahn can cook but he is just so annoying. Don’t make me choose.