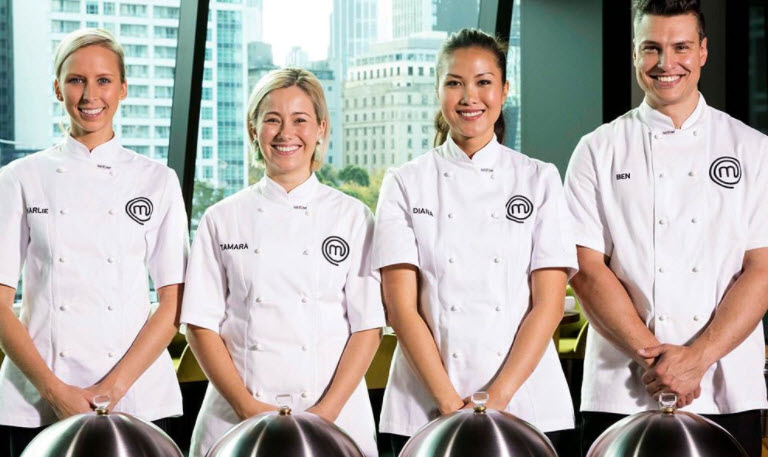 **** WARNING: Ben is making ice cream AGAIN but it’s not his fault.***
The pressure is on as the top four contestants enter one of Melbourne’s top restaurants, Dinner By Heston, for a service challenge. Who will be the first semifinalist?
A Heston restaurant challenge without Heston himself? This can only be a good thing.

We feel like proud parents seeing our talented Top 4 in their chef whites ready to cook at Dinner by Heston Blumenthal 😍 #MasterChefAU pic.twitter.com/7xRRuwQKTe

I’m watching in SA so the show hasn’t started yet but this looks like SUCH a Karlie dish.

Diana gets a dish that would have been right up Arum’s alley:

Ben gets this (at least we know he will get the ice cream right):

Not surprise that Ben got the dessert and …….. we have ice cream 👏👏👏

I voted for him and now just want beige Ben gone. $#%! your kids and all.

Yes Narcissa (aka Tamara footnote credit to Von for the nickname) please turn and run in the other direction.

I’m so totally over wanky food!

Of course Tamara got the easiest dish.

She is not good in restaurant services. Maybe she would have done better if it would have been a dumpling dish.

Heston will have 101 people preping the dishes. Ridiculous to have one person cooking everything for 40 guests

Is this the restaurant where it’s $500 a head or some outrageously ridiculous price? That’s pretty much my whole dole payment. Anyone who would pay that for one meal has no clue about living in the real world.

I have 2 packets in the pantry. Now I am tempted to open one packet

I highly recommend that you do!

I made scones (the lemonade and cream ones, so you don’t have to do that painful rubbing in the butter step) with Mr 5 and our 10yo neighbour today and bought a jar of black cherry jam. Tea is sorted.

One down for Tamara. Didnt flame the pippis

Diana and the beef! Wagyu butchered

Bloody George said its only a dessert. I bet with you he wont be able to do the dessert by himself in the time frame

What? George telling Ben to smile? The fix is in for him to win MC17.

Gary is biting his fist hard as the guest chef spells out how much his beloved is floundering.

Didn’t she also have trouble with fish filleting at a recent challenge?
Uh oh – Ben forgot something.

So far no one is doing a good job… Tamara’s face looks like it’s about to melt off and Ben is reminding me of that teacher from Daria with the one exploding eye.

No way those are paying guests. Just some invited guests having a free feed

Two down for Tamara. No onions.

What! Tamara leaves off an element but the judges are talking it up as though it is perfect.
Give her a participation award and be done with it

I wonder how many diners found a blonde hair with a dark root in their groper? How hard would it be to pin hair back? It was hanging all over that fish.

Judges looking for an excuse not to give Diane dish of the day.

Tamara definitely going into elemination tomorrow night. Judges just said 2 very good dishes and Tamara is not one of them

Yep…think this is now Ben’s to lose.

Serious? Another elimination that Tamara is in and it is cook what you like!!!!!!!!

Again the whole format is wrong. Last cook to get into Final 3 and cooks what you like. They should be set a Pressure Test recreating a dish. But cant do that becase Tamara is in it

Hurry up and finish, MC – I have to watch this tonight.

Thanks for reminding me Juz – I’ll have to catch it on iview.

I love Utopia. I taped it because I watch Offspring.

How creepy was this bit; George doing his serial killer stare through the glass as Karlie panics over her split sauce.

He’s eating with his eyes.

He’s thinking: “I haven’t made anyone yell ‘yes, George’ for a while but now this stupid glass is dividing us.”

Well it is up against Criminal Minds.

Grrrr, pretty sure finals week has never been cook what you want?! So dumplings, or some sort of frou-frou dessert from Tamara then? Or how about this…… dessert dumplings, with a savoury ice cream! A winner with the Stooges for sure.

Don’t forget the most important component! A long dreamy narrative about what the dish means to her.

Oh for sure. With some deep fried crunchy thing like chicken skin or crackling because they get super excited by that.

We think in the early seasons, it was cook a dish from your proposed cookbook.

There had been proper challenges before- cooking for actual people, catering functions, doing a restaurant.
So the “put yourself on a plate” and cook what you want was a rare novelty. Not a weekly event!

Friggin’ macarons without a foot that look like piles of poop. :S

Awww, Ben’s reaction to being in the final three. Feel sorry for Diana, doing so well and yet not being safe.

Yes – Ben got significant praise from the chef, Diana was given good comments but Narcissa just got “good on you for not giving up”. Which was clearly code for “you were totally useless but i have to try hard to think what I could possibly say about an allegedly top finals week cook who stuffed up completely”

And now the poor girl has to compete in a challenge where she can be perfect, and still eliminated by some vague notion of whatever the judges can create to save she-who-must-not. Ditto for Karlie.
Judging on last night’s efforts, I think any of Ben, Diana or Karlie would be worthy winners. Ben will get over his icecream obsession – he is just a kid with a new toy. He probably eats very little sugar and fat type desserts, and has suddenly discovered what we have known for a long time – that ice cream is yummy!

Sorry, the “poor girl” is Diana, referencing the first comment.

I thought, oh good there won’t be ice cream tonight because it’s a set menu. Then there was fucking ice cream on the menu.
Good on Ben for going through to the finals. He deserves it. He definitely got the raw end of the deal. His was the hardest dish of them all & apart from leaving the vodka out didn’t stuff up.
Poor Karlie really struggled with that stupid mayonnaise, but she got there in the end.
Bloody Tamara got the easiest dish of all & she still stuffed up. As the judges were eating her dish, I was wondering if they were even going to comment on the missing onions. They were too busy raving about it & only mentioned it as an afterthought.

So cook what you want … again? This is clearly geared to suit poor Tamara, who’s very limited and only after a gig on TV.
Never ceases to amaze me how they carry on about ‘doing a restaurant proud’ etc. They’re just cooking for a bunch of free-loaders, who know they’re part of a reality show.

And so say all of us.

Ben was doing it for the kids. What a legend.

“One off judgement error”

It’s karma for all the ice cream , Ben.

Oh no, this could well and truly stuff him up.
They’re very conscious of image … except when it comes to judges underpaying their staff and poisoning diners.

I’m against any drink driving but 2months suspension and $400 he must of been in the very low range. A stupid mistake but not as stupid as getting plastered and driving when can’t even stay upright.

Can’t believe that there was yet another ice cream and Ben was the one making it. At least this time it wasn’t his choice. He did state that he loves making ice cream. I actually think it’s beyond love. It’s an obsession.
Would like to see any of the stooges try to prepare those dishes without any help. I wonder how many chefs are generally in that kitchen and how many work on each dish or components of different dishes.

The upcoming elimination should be a pressure test and not cook what you want.

Agreed, Smythe. Level the playing field and make them cook the same thing. And not a dessert!

It would have been a fairer challenge. Also didn’t they all start cooking at the same time but the serving time was staggered. At least that’s what it seemed like to me. If that was the case, then Ben had the most time to prepare and cook and that would definitely not be fair.

Ben had 100 steps, I don’t think any of the others had that many.

Some of the earlier dish has 95 steps.

They all had the same amount of time to prepare, but Ben had the most ‘steps’ by far.

Honestly Smythe – what ARE you smoking?
If they all cook the same thing it would be totally obvious when Narcissa screws up. The only way to protect her is to allow a free for all cook where we can be presented with some kind of Next Level dream 🙂

At least they cooked something different for the service challenge and not their choice. However “Narcissa” (LOL) screws up and yet she is still there. It was safer to decide beforehand to put the one who made the best dish through rather than take a chance and have the worst one leave. Why risk stooges’ pet being eliminated?
Maybe while I was “smoking” 😉 I missed the staggered starts for the service challenge. Was there a staggered start? Don’t think so. If so, didn’t make any sense that some of them had more time to cook than others, but most of this season has been nonsensical and ludicrous.

If Arum was eliminated for cooking the worst dish in the chef’s elimination then why couldn’t Tamara have been eliminated in the service challenge. Instead Ben goes straight to the semi finals.

I’m happy they put Ben through because I don’t think that I can watch him make another ice cream. Will probably see that in the finals because I’m assuming he will be one of the finalists.

Finale always have an cold element. So not surprise if there is ice cream

Fiddly though that recipe is, included in the 105 steps is turning on the oven and lining a baking tray.

Exactly. Not that I am defending Tamara. If she has to peel 2kg on small onions, that is time consuming.

Actually the first dish from Karlie is the one with the disadvantage.

Just demonstrates how far behind she really was!

Good for Ben, a difficult cook. Diana and Karlie, wonderful effort too. PP stuffus uppus yet again but I suppose tomorrow night she can make dumplings and the Gs will ooh and aah and dribble over them and her. I have to watch to the bitter end for my last season of Masterchef, but my sanity is sorely stretched and the TV screen not safe. Fortunately I have just purchased a new TV so have one in hand in case I lose control.

How, just HOW can somebody who failed at EACH and EVERY service challenge be in top 4? And it’s “cook anything Tamara likes” AGAIN?