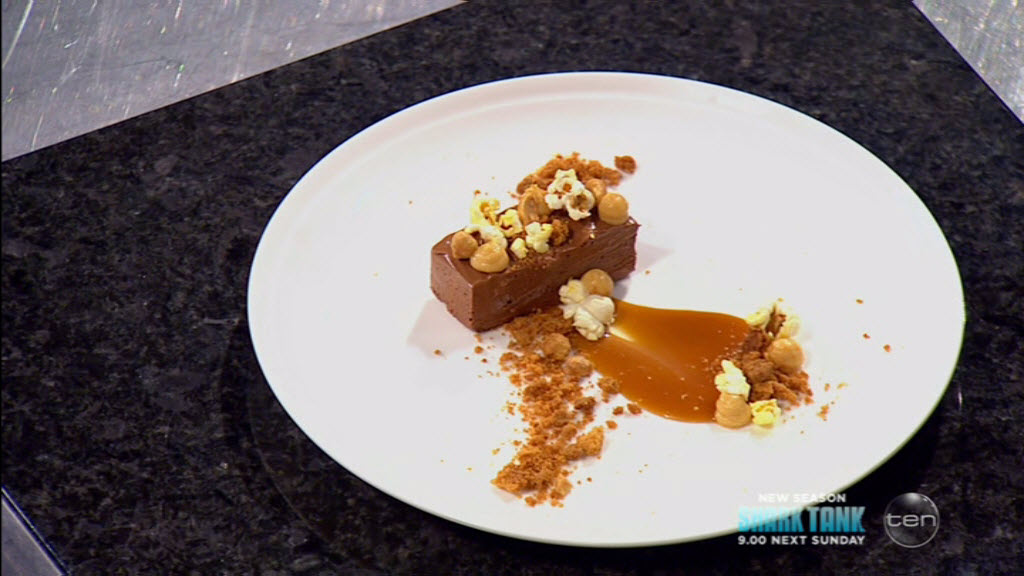 I hope to have a premiere recap up later (allowing for SA time difference), but chat away in the meantime. And for those of you drinking tonight, feel free to have a big slug when the phrase “food dream” or the word “journey” are uttered.
HERE WE GO …
So we start with a fast-paced montage of the highlights of the season and it does look jampacked and super glossy. MC’s budget (and ad revenue) must be sooo much bigger than MKR’s – no dodgy home restaurants where people’s carports have been decorated with velvet curtains to hide the Colorbond. Good to see some past contestants return to set challenges down the track, including this little number from our old fave from last year, Reynold the dessert king.

And then there’s this blue orb thing, which looks super cool. Wannabe contestants are ushered into the warehouse, along with their loved ones, and the judges are treated like rock stars when they walk in. Matt is wearing a stunning purple tartan suit and a black cravat with a shimmer to it. Usual spiel about the winner getting $250,000 but, unlike last year, Matt says they don’t have a set number of aprons to give out.
First up to cook is teacher Celia, who got through in 2014 with her audition macarons but had to pull out due to lasting effects of a brain injury she’d sustained in a snowboarding accident. Okay, yes, it’s the usual “I’m doing it for my kids” “you can achieve anything” yadda yadda, but how cute is little Nathan (even if he does have a rat’s tail) encouraging his mum whip up a spectacular plate, and the footage of Celia cooking with her kids at home. We know she’s going through anyway, but that dessert looks awesome. “It’s a level up from what you brought us before,” says Gary. Surely it’s time to bring in the kid for a teary hug? It’s schmaltzy and the “uplifting” music is corny, but I’d rather watch someone with a brain injury cook a killer dessert than fame-hungry people who barely know one end of a spoon from another on MKR.

Next up is the coffee roaster dude with one of those button earrings. We know he gets in because we’ve seen footage of him in the preview, freaking out in a team challenge. Good on him for giving the death dish, risotto, a go – and for wearing a glove when handling the raw meat. Hope he’s not one of those “I don’t do desserts” guys.

Yay a drinking game to kick this season off thanks Juz 😛

Remember to vote in the poll – here’s how it looks at the mo:

Can they really drag it out any more for Cecilia??

Maz but she’s had brain surgery too AND a single mum double whammy. 😯

Do you feel emotionally manipulated yet?

Gees, I should have recorded it. The ads are going to do me in. 20 minutes of show and one person through.

This ad break is going forever. Appalling. Enough time to do a roast ,,,,,

I didn’t mind Cecilia’s backstory – seems relevant, although a little drawn out. How can they not put her in, no matter the level of her cooking.
Love her red bra.
Love Nathan’s plait.
I have a tear, just one but it’s a good start.

Yeah I got teary eyed when her boy brought her the apron.

How did they get this cat to cry on cue. Maybe read three little kittens, they lost their mittens. 🐈

Is coffee roaster a real occupation?

I think it is. Need a good roaster to produce great coffee beans

Aborted honeymoon? Is that a sob story worthy of an apron.

Food’s always been number one, my biggest passion. One word for you…..
APPRENTICESHIP

Geez they’re whacking them through at high speed now.

Best macarons since the Big Bang.

Remember the good old days when we used to see so many failed wannabees in the auditions. Those were the days

They screen them now beforehand in all the capital cities. Often former contestants are asked to help judge the pre-audition auditions. So that weeds out the crazies in onesies.

And a bunch of people were given aprons, with no backstory. Whats with that?

What’s with George’s jacket the back is all shiny and appears to be threadbare in the middle with pink shimmering through????

And now Carmen with the obligatory disapproving parents.
‘And this is what Masterchef is all about. This is a-maz-ing.’
And now I’m drinking.

Haha my son said that’s why her dad’s not there because she should be out surveying.

One contestant (Zoe) has brought both her grandmothers!!!!

and about 50 other relatives.

They had to fill the shed with cheering people somehow.

I just want one of them to say “I actually lead a satisfying and fulfilling life so I’m quit ambivalent about this.” instead of “I just want this so bad” or at the very least to say badly.

Julie Goodwin with her lamb roast and puddle pie would have no hope!

Zoe’s family will boost the ratings all by themselves. Those grandmothers are better than a backstory.

Yeah, they are alive!

Gary doesn’t want the middle aged man to get through.

Miles met the script criteria. Knockabout guy. Not a great cook. Here’s your apron. Looked good but … the food, I mean.

Not many savoury dishes nearly all desserts. 🙁 hope they’re not one trick ponies.

And here’s the dead Greek grandfather, dying just before the auditions. Dish in memory of him..
And another drink. At this rate the bottle is going to be empty before the next ad.

The bottle was empty half an hour ago! 😉

I’m too drunk to continue watching. Too many dreams and too many nonnas.

We have dead parent now with the siblings (plus someone the Canadian audience can barrack for).

Fallen ice cream lady wore gloves while cooking – they’ll soon knock that kind of hygiene out of her.

Alot of people seem to be getting through on panna cottas.

And a bunch more people getting through with no backstory. I’m going to drink anyway.

Yes, she deserves an apron says the husband of the chatterbox, so I can get a couple months peace.

What’s with these people who can just cook and have no back story? What’s going on? Haven’t they heard of reality tv?

Remember blonde Anna from last year (who looked a bit like Anna Kendrick). It was a good 15 episodes in before I even knew she was in the competition.

Only one bottle? I know tomorrow is a work day but the MC opener is at least two bottles.

The chopper’s in the wrong place!
Oowa, did I say that!

I really hoped the croquembouche lady would get through. It looked really impressive in the promos. But unfortunately wasn’t cooked enough.
Thank God someone’s finally broken the death dish risotto curse.
I’m looking forward to seeing the brother & sister compete.
How many Greeks are there this year? Every second person seemed to be Greek with their whole family there.
A lot of funny comments on Twitter. Someone wrote is anyone’s on their own they must be an orphan.

Carole, I wanted her to get through, too. If only she had made her choux buns smaller…! It was such a gutsy thing to try, such a change from the never ending pannacottas,

20 seconds in and we had nothing but a stream of trite Masterchef one-liners about “heart on a plate”, “passion” and “dreams”.
It makes Erin’s potty mouth on MAFS refreshingly real. But I will endure the corny production to see the food these guys whip up.

She said she dreams food.

Aha – chatty lady has a name!

My goodness. I would hate to be called Needy.

She said she dreams about cooking food, but before that said she cannot live without food. Or words to that effect. I’m just rewatching on Tenplay, cos I missed most of the episode as it happened.

Dammit, I didn’t check in here beforehand so I missed out on the drinking game. I doubt all the cliches were used up tonight, though, so I can play tomorrow.

I am exhausted from all the contestants and families jumping around and screaming and cheering. Some of those dishes were impressive, but I wonder how all that work was done in 60 minutes. Can ice cream be made in an hour, even in a machine?

So far I’m Team Jimmy, too, Juz. I like Matt Preston, but that “we’d like to see you cook again” trick he pulled on Jimmy was mean. I think he meant it to be funny but it struck me as a bit of a dick move.

Things I’d very much like to see less of on cooking shows, the paintbrush smear of whatever on the plate, and pureed goddamn vegetables. Let’s make the judges have to chew their food.

Von, I’m guessing you appreciated several sightings of cooks wearing gloves and women with hair tied back. And I’m a bit over edible flowers. Just because you can eat them doesn’t mean you should.

“Just because you can…doesn’t mean you should” is such a great philosophy to have for life in general.

Ha ha.Jayblossom, get cracking. A would like his in green.

I guess if you are a man wraring crotcheted shorts, then it’s OK to wear them up to your waist and tuck your shirt in.

I did, Juz! And I noticed how many did or did not present the plate properly to the judges, e.g., no thumbs on the plate.

Rap lady had her long hair pulled up, but it was still swinging above the food while she was cooking. The rap presentation made me roll my eyes really hard.

Gaaaaaawd the theatrics. Why oh why can’t they be more like the UK version? That one makes money too, I’m convinced this emotive crap isn’t necessary. I had to mute a few times, espec when that chick started rapping and the judges ENCOURAGED her. This does not bode well.

Another vote for no more smears, purees and especially edible flowers. Is something really edible when it tastes bitter and vile enough to make people wince? Seriously, go eat a bag of nasturtiums judges, and tell me they’re delicious.

Are they not allowed to say ‘cooking’ anymore?? It’s all ‘food’. ‘Food is so important to me, it’s my whole life, I couldn’t live without food.’ Hey! me, too!

Maybe he means this, TH.

Have they done this challenge yet? It might be a good one for Heston.

In his position, the last thing I’d be thinking about at night is the appalling earrings he’s packing and then musing on the simpering tear packed performance he put in about food being more important than oxygen to him..

He didn’t walk on water…he made a risotto. Any nonna worth her salt can do that.

If it were true, we’d watch The Biggest Loser to see the best cooks.